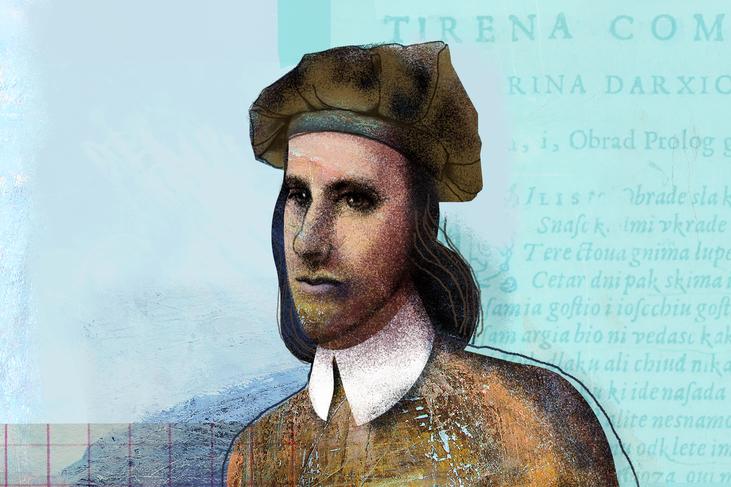 (Dubrovnik, 1508? – Venice, 2 May 1567) Comedy writer Marin Držić, nephew of poet Džore Držić, was born (probably) in 1508 in Dubrovnik in a plebeian merchant family, who lost their nobility status and went bankrupt because of “five thousand ducats” of debt. He had five brothers and six sisters, but we have no reliable information about his childhood, youth and education in Dubrovnik. He was nicknamed Vidra (Otter) after that intelligent animal.

In 1526, he became a priest (he was appointed rector of the Church of the Holy Spirit in Dubrovnik), he was an organist in the Dubrovnik cathedral, and in the 1530s he went to Italy to study, Siena to be more precise, on a government scholarship. Still, the aforementioned debts were somehow always like a noose around his neck. Držić is probably the author with a most enigmatic biography in the history of Croatian literature; his life was marked by many contradictions and contrasts. Toward the end of his life he attempted to perform a coup d’état in the Dubrovnik Republic, with the assistance of the Italian Duke Cosimo I de’ Medici and his son Francesco. He demanded plebeian participation in government. In his letters to the Italian ruler (kept in the State Archives of Venice), he called Dubrovnik senators “mad freaks” unworthy of power. Since de’ Medici showed no intention of participating in the conspiracy, Marin decided to return to Dubrovnik and on that journey, he disappeared without a trace. He died a mysterious death in Venice in 1567. The only work published during Držić’s lifetime was in Venice in 1551, entitled Pjesni Marina Držića ujedno stavljene s mnozim druzim lijepim stvarmi. Marin Držić was responsible for putting Dubrovnik on the cultural map of Europe, and he exerted considerable influence on the Croatian and European Renaissance. Despite the fact that during and after the fall of the Republic of Dubrovnik, Ragusans were not inclined to erect monuments in the old city centre, they still installed the sculpture of Marin Držić created by the great Croatian sculptor Ivan Meštrović by the theatre that carries the writer’s name. Likewise, a town square in Dubrovnik (Držićeva poljana) and its smallest museum – House of Marin Držić, envisaged as a scientific-research centre were also named after.

Držić’s most famous works were created during the ten years he spent in his native city, after returning from his studies in Siena, having never completed his education there. His plays were performed by troupes of young noblemen – because women were not allowed to act, whose names we discover in the prologues of his comedies; Pomet družina, Njarnjasi, Garzarija... He also wrote poems and pastorals, but his greatest importance was as a playwright and comedy writer. A great many of his works were not preserved in their entirety, and his comedies deal with eternal human preoccupations: love, money, desire for pleasure, conflict between kindness and honesty and hypocrisy and evil. Their themes and style provoke laughter in readers, because his characters were almost entirely caricatures. Thus, his comedy Dundo Maroje (Uncle Maroje), performed in 1551 at the city hall in the Rector’s Palace – which is also Marin’s most performed and translated work – emphasizes the thriftiness of the said Uncle. He is also the author of the lost comedy Pomet (performed in 1548 in front of the Rector’s Palace), the pastoral comedy Tirena, the condensed farce in verse Novela od Stanca, the rustic-mythological drama in verse Venera i Adon or Pripovijes kako se Venere božica užeže u ljubav lijepoga Adona u komediju stavljena, pastoral-rustic play Džuho Kerpeta that is extant only in fragments, comedy Skup, mythological drama in prose and verse Grižula or Plakir, comedy in prose Tripče de Utolče (Mande), comedies in prose Arkulin and Pjerin, not preserved in their entirety. Towards the end of his life he wrote his only tragedy Hecuba, that deals with the relationship of the state towards individual human suffering. He was accused of plagiarism for his pastoral comedy Tirena, and was defended by his older distinguished compatriot and writer Mavro Vetranović. The performance of his final work, Hecuba, was banned by the Dubrovnik government on two occasions (9 March and 21 May 1558, and it was finally performed on 29 January 1559). They said they banned the play because it was “disturbing.” Držić’s powerful proverbial style is close to Dante and Shakespeare, or one might say that the latter was close to Držić, as you prefer! “Rat poguba ljudske naravi,” “Za česa su dukati nego da se ije, pije i trumpa,” “Živi se čuju kadgodi, mrtvi nikada,” “Amor nije amor, zlato je amor” – these are only some of the quotes that cultivate a certain shared style.

This man of letters, who never completed his education, was elected rector of the student hostel Casa della Sapienza in Siena in 1541, but because of his contentious character he became the subject of a police investigation in 1542. Marin actually participated in a theatre play in the private house of a Siena nobleman, which was forbidden. He was forced to leave Italy, so he returned to Dubrovnik where his most famous works were created and performed in the next ten years.