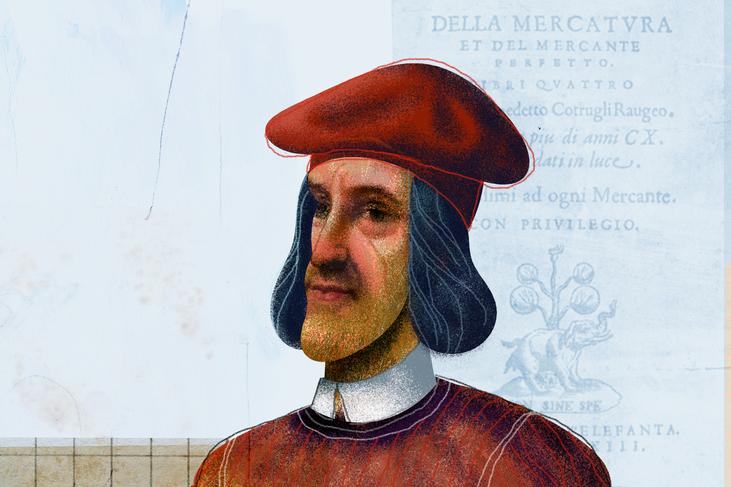 (Dubrovnik, c. 1416 – Aquila or Naples, 1469) “It has been more than 110 years since patrician Benedikt Kotruljević of Dubrovnik, a man of expert scientific knowledge and an experienced merchant, wrote four books on the subject that, as he warned, nobody ever addressed since the beginning of time, i.e. the trading skill.” Thus, in 1573, the renowned Croatian philosopher Frane Petrić started his introduction to the printed edition of On Trade and the Perfect Merchant by Benedikt Kotruljević of Dubrovnik. Dubrovnik and commerce always represented an indivisible union, and the Ragusan Republic owed its progress in the “golden age” of the 15th and 16th centuries precisely to the affirmation of trade.

If we bear in mind Cicero’s famous expression “merchants are the strength of state,” it is not an accident that Kotruljević dedicated his work to Fran Stjepović, “a prominent Dubrovnik merchant.” Nevertheless, Kotruljević’s humanist idea on the perfect merchant was rather ambitious because it required establishment of a scientific basis for human activity – that was unpredictable, often shifty and immoral – and assign it a place in the universal divine order. That is why in his introduction Benedikt said: “…my writing will be useful for you and many others, especially those that want to acquire property honourably and not transgress against God or his fellow man.”

Kotruljević family originated from Kotor. They came to Dubrovnik around 1350 and quickly became members of the Confraternity of St. Anthony that were joined by Dubrovnik merchants. Benedikt was born in Dubrovnik around 1416. He finished his primary education in Dubrovnik and then he went to study in Italy. It seems he studied philosophy and law. Because of the premature death of his father he had to interrupt his studies and after 1436 he returned to Dubrovnik to take over the family business. Soon after, together his brother, he founded a trading company that exported wool and conducted business in Venice and Dubrovnik. He opened textile companies in Italian cities, and business interest took him from Northern Africa all the way to Bulgaria. Because of his extensive experience, he held several important offices in the Dubrovnik Republic, so in the period from 1448 to 1453 he was its commissioner in Naples, and in 1458 he became the consul of Dubrovnik in the Kingdom of Naples. After he moved his family to Naples in 1453, the Aragon Kings of Naples named him a knight, judge, chief judge, advisor and commissioner. Life in Naples lead Benedikt to the centre of the Neapolitan humanist circle. There, he could easily find many historical sources of Classical Greek and Hellenistic-Roman heritage, but also of the Patristic and Scholastic doctrine, and also be at the centre of new humanist ideas about the perfect nature that man should aspire to. We know of two works by Kotruljević that were regrettably lost, and they are: On the Choice of Wife (De uxore ducenda) and On the Nature of Flowers (Della natura dei fiori). His most famous work was definitely: On the Art of Trading (Il libro dell’arte di Mercatura) from 1458, a revised edition of which was published by Frane Petrić in 1573, while his book On Navigation (De navigatione), written in 1464, was attributed to Kotruljević as late as 1996. This was the first work of its kind in Croatian and European literature. Although Fra Bartolomeo Luca de Pacioli was long considered the “father of accounting,” because in his work Summa de arithmetica, geometria, proportioni, et proportionalità, dated 1494, he published a detailed description of the double entry bookkeeping, the study of Kotruljević’s work On Trade and the Perfect Merchant – the title under which it was published by Petrić – proved that the true “father of accounting” was Kotruljević, and that he defined the double entry bookkeeping forty years before Pacioli. The said principle is the basis of all bookkeeping to this day.