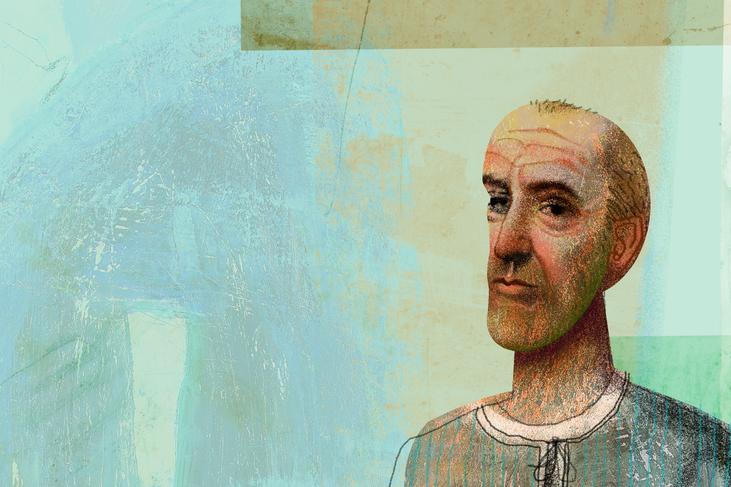 (Milan? – Šibenik, May 1429) Bonino di Jacopo da Milano belongs to the group of artists whose life and work connected the two Adriatic coasts. His successful seventeen-year career in Dalmatia, as well as his extant works, testify to the fact that he was a sculptor of great skill and ability, and that he acquired a great reputation in his new homeland. He is especially important because he brought the Lombard style of Italian Gothic art from his native city to the Croatian coast and because in all the cities that he worked in, he collaborated with local stonemasons and stonecutters.

We know almost nothing about his formative years in Italy, and the first mention of him in Croatia dates back to 1412 in the town of Korčula, where he was mentioned during the construction of the cathedral. He created the main portal of the Korčula Cathedral with the statue of St. Mark, as well as some details of the side portal. Soon after, he moved to Dubrovnik where he got married in 1417 and spent the next ten years working as a state artist in the Republic of Dubrovnik. He created several works in Dubrovnik; he worked on the construction of the Dominican church and carved its representative south portal, then he worked on the construction of the palace of the Bosnian nobleman Sandalj Hranić Kosača near the Rector’s Palace, and he was also engaged in the construction of the old church of Dubrovnik’s patron saint St. Blaise. However, his most famous and popular work in Dubrovnik is definitely the stone sculpture of the knight Orlando (Roland) in Dubrovnik’s main street, the Placa (Stradun), which he carved in the first years of his stay in the city (1419). On one side, we can see the sculpture of a young man in knight’s armour, while gothic decoration in shallow relief surrounds it on three sides. On the pedestal, underneath the sculpture’s feet, is the carved official unit of measure in Dubrovnik – cubit (51,2 cm). Although this is perhaps not the most sumptuous of Bonino’s works, it became one of the visual markers in Dubrovnik’s historical nucleus. Besides, for centuries, more important than any other characteristic of this monument was its symbolic meaning, because Orlando’s columns were erected in Central Europe as visible signs of independence and freedom of a city, as well as safe business activities. Even though many tales were spun and many legends told about the erection of Orlando’s column that allegedly connected him to Dubrovnik – it was also the southern-most such column in Europe – Orlando’s column in Dubrovnik was erected thanks to the political ties Dubrovnik had with the powerful Hungarian-Croatian King Sigismund of Luxembourg (ruled from 1387 – 1437). After Dubrovnik, Bonino moved to Split where he created perhaps his most important sculptural work in 1427 – the side chapel of St. Domnius (sarcophagus and ciborium) in the Split Cathedral. This is the only extant work that Bonino signed. Soon after, he moved to Šibenik, as the city was about to start building its Cathedral of St. James and he was nominated as the first builder, i.e. the proto-master of the cathedral. Unfortunately, he soon died of plague, but during his short engagement he managed to carve a good portion of the cathedral’s main portal, later continued by his collaborators. Despite the fact that little is known of his origin and education, it is possible that when he came from Italy he already had a certain reputation because all of his works on the Croatian coast were representative in nature (cathedrals, palaces, public sculpture). It is, therefore, not an accident that his first engagement was building a cathedral. We assume that he was invited to Korčula to carry out a more important task than just the portal – perhaps it was even the concept of this low basilica with three naves and three apses, typical of his native Lombardy. Likewise, the palace of Sandalj Hranić Kosača in Dubrovnik, for example, was one of the most opulent city palaces of its time, and his abilities and status are equally confirmed by his work on the cathedrals in Split and Šibenik. These were all highly important local buildings. Despite the fact that sudden death interrupted his career, Bonino was an important figure of the High Gothic style on the Croatian coast.