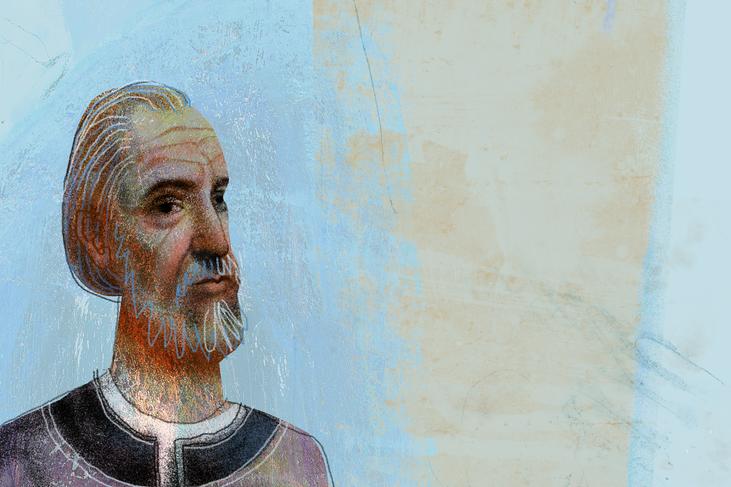 (?, 12th c. – Dubrovnik, 1205) In 1198, after the Third Crusade ended in failure, Pope Innocent III sent letters throughout the Christendom calling for a new crusade to the Holy Land in order to free the Holy City of Jerusalem. Unable to pay the Venetians the full cost of transportation, in 1202 the Crusaders occupied Zadar in exchange for debt referral, and in 1203, with the help of Venice, they conquered Constantinople and established the Latin Empire (1204 – 1261) in the former territories of the Byzantine Empire.

Thus, Venetians came to control the ports and islands between Venice and Constantinople. On his way to Constantinople, the newly elected Latin Patriarch, Venetian Tommaso Morosini conquered Dubrovnik in 1205. The story about the Dubrovnik Rector Damjan Juda is related to this conquering of Dubrovnik, which remained under Venetian rule until 1358. We do not know much about Damjan Juda himself. The little we know says that he was a member of the family whose wealth and reputation made them stand out from other families in Dubrovnik in the late 12th and early 13th century. He had at least four children; two daughters and two sons. Marriages of his two daughters were important factors in his fate. At that time, wealthy families thought of marriages in “political” terms because, besides preservation of material wealth, they were also the means of finding allies that would increase their political power. So, one of Juda’s daughters married Petar from the Beneša (Benessa) family, and the other married Grubeša from the Gundulić (Gundula) family. Almost all of Dubrovnik’s chroniclers, who retrospectively described the rule of Rector Damjan Juda, say that he abused his power and broke the rule of the succession of power, which meant that he tried to establish his authority above the authority of the Major Council. The Major Council was the central institution that elected candidates for most important offices in the commune, for a mandated period. This practice prevented the possible tyranny of powerful individuals, i.e. it limited the power of clans that always stood behind those individuals. In the case of Damjan Juda, who single-handedly prevented the Major Council from electing the new Rector of Dubrovnik, the powerful Ragusan family of Bobaljević (Bobali) stood in opposition to him. After their public objections, Rector Damjan Juda quarrelled with their members and banished some of them from Dubrovnik, disturbing the political balance between the opposing clans. His authority was obviously so strong that the opposition decided to invite help from Venice, an eternal rival of Dubrovnik, in order to depose him. Petar Beneša was one of the conspiracy leaders – Damjan Juda’s son-in-law. With the assistance of the Bobaljević clan, he probably estimated that he could not prevent Venetians from assuming power, because of their absolute domination in the Adriatic in that period. Beneša was perhaps trying to secure the best position for himself with the future rulers – this we cannot know for sure. What we do know is that Rector Damjan Juda was tricked into boarding the Venetian galley that was anchored near Lokrum, and after he realized he was deceived he committed suicide. Although Dubrovnik chroniclers were unanimous in their negative opinion of the usurpation of power by Damjan Juda, they concealed the fact that Damjan Juda refused to easily surrender Dubrovnik to the Venetian rule, at least not without political negotiations, which he would have led. However, an even more important consequence for Dubrovnik’s history was the fact that this event started the centuries-old rift between Dubrovnik patricians, i.e. families who sided with the Bobaljević clan, against those who sided with the husband of Juda’s other daughter – the Gundulić clan. This rift lasted until the fall of the Republic of Dubrovnik in 1808.