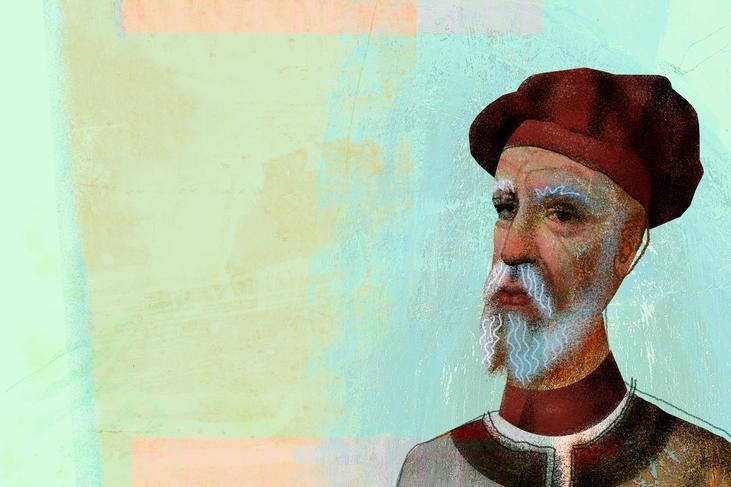 (Évora, Portugal, 5 April 1517 – Dubrovnik, 16 May 1599) A Latin poet whose real name was Isaia Koen, hailed from a wealthy family of Portuguese Jews. He was educated in Portugal and Spain. After being exiled he travelled through England, Belgium, Italy (Ferrara, Genova, Pescara, Ancona, Rim), spent a short period of time in Constantinople, and in 1558 he finally settled in Dubrovnik as an already prominent and respected poet, and stayed until the end of his life.

He was an author of couplets, elegies, odes and epigrams, that were characterized by a didactic and festive tone. He lived in Dubrovnik for more than four decades, taught classical languages and socialized with many of his distinguished contemporaries, so we can safely say this was his most prolific period. He died and was buried in Dubrovnik. As a humanist, he was well-known in European circles and he spent time with Aldo Manuci, Lilio Giraldi, Torquato Tasso and many others, and after his arrival in Dubrovnik he became friends with many prominent figures; Dubrovnik poets and intellectuals. He was part of the circle that included Dinko (Dominko) Zlatarić, Mavro Vetranović, Miho Monaldi, Nikola Vitov Gozze, Šimun Beneša. He wrote poetry on various subjects and commented on contemporary events in Dubrovnik, celebrated antiquity and tradition, as well as meetings with prominent contemporaries. He also discussed eternal and universal questions; the transience of life and death. Therefore, his poems “illustrate” life in Dubrovnik in the middle of the 16th century, describe his contacts, joyful friendly gatherings and life in his second homeland: “I hate a drinking companion who remembers everything said during a feast after copious amounts of wine, it should all be washed away with underground waters, you know.” From the moment he arrived to the city, Pir was interested in what was going on around him – he quickly became familiar with life in Dubrovnik that was in its heyday at the time. He did not shy away from playing with erotic motifs, like in his first collection of poetry entitled Carmina, dated in 1545, which is also important for its ingenious solutions in terms of versification. The most comprehensive description of Dubrovnik can be found in Pir’s epistle Ad Paulum, dated in 1563, whose printed edition is today kept in the Vatican Library. Croatian historiography calls this magnificent work of over five hundred hexameters “the most beautiful praise of Dubrovnik and everything in it.” Pir sang about the foundation of the city, its survival in a difficult position, described the role of the Republic’s Rector as the keeper of peace, he praised Dubrovnik as an oasis of freedom living in accord and harmony and maintaining peace as its highest value. In 1582, he received an award for his poem De illustribus familiis quae hodie Rhacusae exstant, which is significant also as a historical document. Based on historical sources, and paraphrasing Horatio and Virgil, Pir wrote verses that celebrated selected Dubrovnik families – pillars of the Republic and guarantors of its prosperity, reputation, wealth and freedom. He dedicated the collection Encomiastes to his friend and patron Tomo Budislavić. Besides its literary value, his poetic oeuvre represents an important source of information for the cultural history of Dubrovnik in the second half of the 16th century. Admiration and gratitude that he felt for the city is certainly reflected in his poem dedicated to St. Blaise: