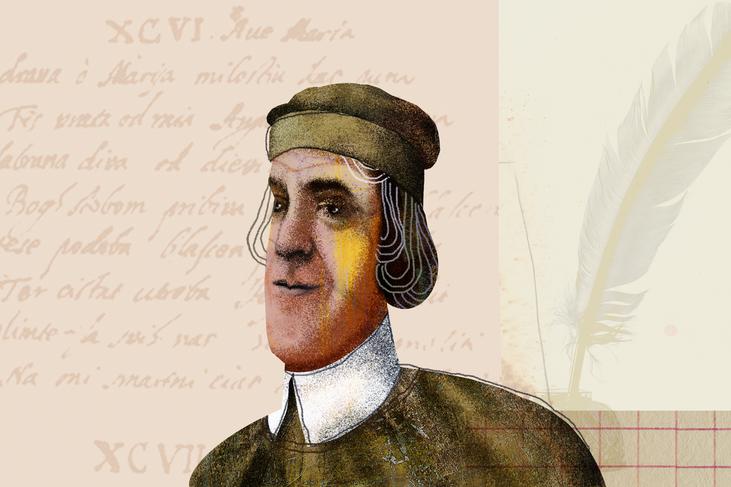 (Dubrovnik, 6 February 1461 – Dubrovnik, 26 September 1501) The Renaissance poet Džore Držić was a prominent plebeian who started his education in Dubrovnik, and completed his humanist studies in law in Italy (he became a doctor of civil and canon law), and in 1487 he was ordained a priest. He was the brother of painter Vlaho Držić and uncle of the famous Marin Držić.

He was renowned for his rhetorical skills and participation in Latin dialogues in the Dubrovnik cathedral. He was also the rector of the Church of All Saints in Dubrovnik and the chancellor of the Dubrovnik chapter. Džore Držić is most important for his literary works and is one of the oldest Croatian authors who wrote lyrical poetry. To be a poet in Đžore’s time meant, above all, to emulate Italian Renaissance poets, primarily the greatest and most famous of all – Francesco Petrarca. Petrarchism influenced and left a mark on generations of European poets and their works, so it did not surprise that Držić also gravitated towards this prevailing model and poetics. He wrote love poetry as a priest, so his poems reflected spirituality and contemplation. His oeuvre was also influenced by folk ballads, vernacular forms and expressions, and he was thought to have written some well-known anonymous poems like the popular Odiljam se. Držić’s poems were mostly written in dodecasyllabic meter with internal rhyme, characteristic of Dubrovnik, in the form of a short dialogue, directed at a person or object. The so-called “Dublin manuscript” entitled Džorete Držića pjesni ke stvori dokle kroz ljubav bjesnješe was discovered in 1963 in Ireland, and resolved some of the remaining doubts related to the authorship of some of Držić’s works. It turned out he was not the author of some poems; however, some previously unknown works were discovered instead. The manuscript contains 96 poems and a pastoral dialogue entitled Radmio i Ljubmir, written probably in the late 15th century based on an Italian template. It is characterized by pronounced realism, both in the sober replicas of Radmio the shepherd and words spoken by the love-struck Ljubmir. Džore thus presented some important elements of later Dubrovnik dramatic literature of all types. This pastoral eclogue was the first secular dramatic work in Croatian literary history, so Džore Držić can rightly be considered the founder of modern Croatian drama. Držić’s love poems, his Pjesni ljuvene, enjoyed widespread popularity in Dubrovnik and were read, orally transmitted and memorized, which we are able to conclude from the number of his poems included in the oldest collection of Croatian lyrical poetry entitled Ranjinin zbornik or Kanconijer Nikše Ranjine (Ranjina’s Miscellany). In 1507, when the young fourteen-year-old Dubrovnik patrician, Nikša Ranjina started compiling love poems in manuscript form, used by his fellow citizens to court their ladies, Džore Držić had already been dead for six years.