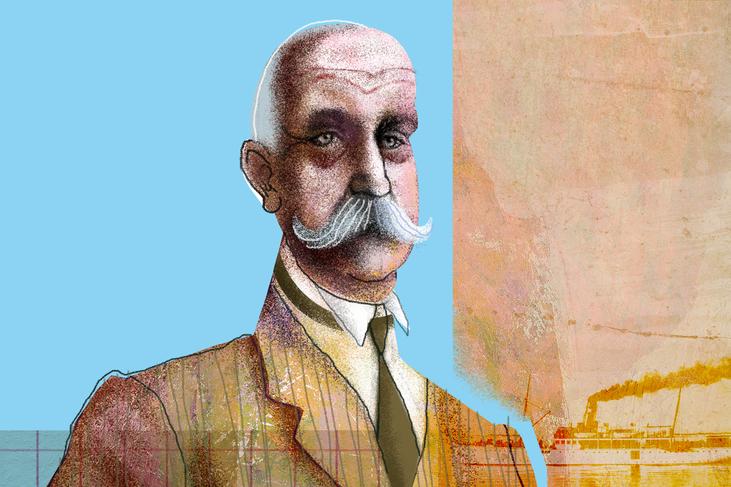 (Šipanska Luka, 24 May 1847 – Dubrovnik, 2 January 1941) Federiko Glavić was born in a poor and large family on the island of Šipan near Dubrovnik. Not wanting to stay on his native island and work as a farmer, at age fourteen he travelled to Chile. He settled in the city of Iquique in the north, where he first worked as a trade assistant, and later as a skilful merchant.

As time went by, he invested his capital in saltpetre mines, and in 1886 he became part owner of the Officina Salitrera Union factory. He was an active member and the president, for one mandate, of the Sociedad Austro-Hungaria de Socorros Mutuos (Austro-Hungarian Mutual Assistance Society), association of Croatian emigrants. He met his future wife Maria Maldonado y Maldonado in his new homeland, and many people thought that the marriage helped him climb the social ladder. Having spent almost 25 years in Chile, he returned to Dubrovnik at the end of 1896 as a rich man. With the capital that he earned he first started to work on his social affirmation. He bought and expanded his house in the centre of Šipanska Luka, he bought and renovated the summer residence in Šipansko Polje, he built a family tomb and started building a luxurious family villa in Dubrovnik itself, at Pile (Villa Dubravka). However, he played an especially important role in maritime affairs because he invested large sums of money and became one of the major partners of Dubrovačka parobrodska plovidba company. For the next almost half century, Federiko Glavić would play one of the leading roles in the maritime and economic life of Dubrovnik, and beyond. He played a key role in 1909 during the imminent threat of the relocation of the company’s seat from Dubrovnik, because the Austrian authorities demanded that all steamship societies consolidate into one joint-stock company with a seat in Trieste. Because of Federiko’s energetic commitment and resistance – we should also mention his purchase and large partnership stake in the company – Dubrovačka parobrodska plovidba managed to preserve its independence and a seat in Dubrovnik. This move made sure the capital stayed in the headquarters and prevented the influence of foreign capital in the maritime business, which contributed to the preservation of its national character. His visionary move chartered a new and independent business course in Dubrovnik maritime affairs for the next thirty years.

Federiko encouraged the foundation of the Dubrovnik Trade Bank and was one of its founders in 1902. At that time, the bank was the only independent financial institution in Dubrovnik and, by investing its capital in the City and its surroundings, it made a great contribution to the development of trade, maritime affairs and the economy in general. The entire time, he also encouraged investments in modernization and maintenance of the fleet and construction of new ships. After the tragic death of his daughter, his nephew Tomo Glavić (1884 – 1979) became his principle associate and heir. In the years preceding World War II, he expanded the company by investing in tourism and hotels (e.g. he bought Hotel Dubrovnik in the centre of Zagreb). Besides being one of the most important businessmen in Dubrovnik in the 20th century, Federiko was also one of its greatest benefactors. Specifically, during his lifetime he helped the needy in a variety of ways, he supported different actions, and he bequeathed large sums of money in his will to different cultural, educational and humanitarian institutions in Dubrovnik. Many anecdotes about his life continue to be recounted in Dubrovnik to this day, especially his somewhat unrefined behaviour, his panache despite his advanced age, but also stinginess in small things and generosity in great ones. On the occasion of his death one newspaper article said the following: “Late Federiko had a strange character. He had an innate fear that someone was going to cheat him in small matters and abuse his wealth. He could not abide by this and he was known to haggle for even half a dinar, and many people judged him wrongly as a miserly and greedy man, while on the other hand, if the matter was to benefit the society he was known to sacrifice and risk hundreds of thousands, even millions and his entire capital. When it was necessary to buy a new steamship, he agreed for everyone to contribute as much as they could, and he would cover the remaining cost just so they would be able to acquire the new steamship. The only thing that the English institutions asked for was his guarantee and they were willing to loan millions to Dubrovačka plovidba. If the society needed a large sum of money – Federiko Glavić put everything at its disposal.” All of his new steamships, before coming to the city port for ceremonial blessing, had to sail around Šipanska Luka first, so that he could boast about his success to his compatriots. He would then, even at an advanced age, examine every last corner of the new ship, not only salons, cabins, the engine room, but also sailor cabins and storage space. Investments in the Dubrovnik maritime business was always of utmost importance to him, so at every major annual company assembly when they would discuss how to split the profits, he would say in a strong voice: “We first have to maintain the steamships!”