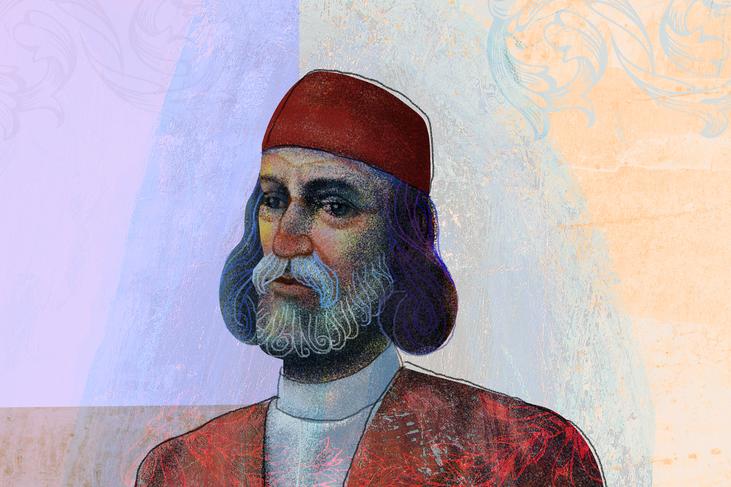 (?, beginning of the 15th c. – ?, after 1455) The praise of cities (laudes civitatum) occupies a special place in medieval literary genres. The point of these works was not just the description of cities, which thematically followed mostly one formal sequence, but also personal impression that was an equally important and essential element to get the comprehensive idea of the city. For this reason, the author of the lauda had to be a person who had a publicly recognized authority.

His word was believed, and his kind nature, upbringing and education guaranteed that everything he wrote was truthful. One such author was Filip de Diversis, whose work, Description of the buildings, political administration and commendable customs of the City of Dubrovnik (Situs aedificiorum, politiae et laudabilium consuetudinum inclytae civitatis Ragusii ad ipsius senatum descriptio) from 1440, was the only real medieval praise of the city written in the territory of Croatia. Filip de Diversis was born in Italy. We know that he belonged to a bourgeois family in Lucca, however the date and year of his birth are unknown. Since he also added the noble surname of – Quartigianis (probably on his mother’s side) to his surname, it is obvious that he had both plebeian and noble ancestry. After the political turmoil that his family participated in, de Diversis moved to Venice. Filip was educated there and was mentioned as rector scholarum as early as 1421. Since he is mentioned in source documents as a ser, he probably had noble status in Venice. At the invitation of Dubrovnik, and allured by a high teacher’s salary, he came to Dubrovnik in 1434 where he became the headmaster of a newly founded high school, located in the building that previously housed weapons (later the Sponza Palace). De Diversis taught grammar, rhetoric and classical literature. However, there were some misunderstandings with the Dubrovnik authorities and the dissatisfaction was mutual. The government objected to his frequent absence from the city and the school, so in 1438 they reinstated teacher Andrija de Drincassi, and in 1440 he was replaced by priests Marin Brajković and Nikola Junčić. De Diversis, on the other hand, objected to the amount of salary he received as well as the lack of assistant teachers, and he also thought that Dubrovnik did not respect him enough, at least not as much as Venice did. This all culminated in 1440 when the Dubrovnik government lowered his salary, and he wrote a lamentation about the issue. Disappointed and probably aware that he could not connect his life in Dubrovnik and Venice, in 1441 de Diversis submitted his resignation to the Minor Council, with the explanation that he had too much work to do in his own country. In 1441, the Major Council immediately started looking for another good teacher in Venice, offering a higher salary than Diversis received. In the period from 1434 to 1441, de Diversis left a significant trace in Dubrovnik. His three ceremonial orations on the Hungarian kings Sigismund and Albert are particularly notable: Oratio in funere Sigismundi imperatis, Oratio in laudem Alberti regis and Oratio in funere Alberti regis. They were written in 1438 and 1439, and were spoken in the Dubrovnik cathedral to commemorate these Hungarian kings. Nevertheless, de Diversis’ praise of the city of Dubrovnik, created perhaps as his futile attempt to appease its government, is his most valuable legacy. After he left Dubrovnik we have very little information about de Diversis. In 1444, he sent a petition to Lucca in which he mentioned a numerous family that he had to feed. The final mention of him was in 1455 when he taught St. Jerome in Venice and copied his selected epistles, and several epistles of St. Augustine and Origen’s speeches. We do not know the date or place of de Diversis’ death.