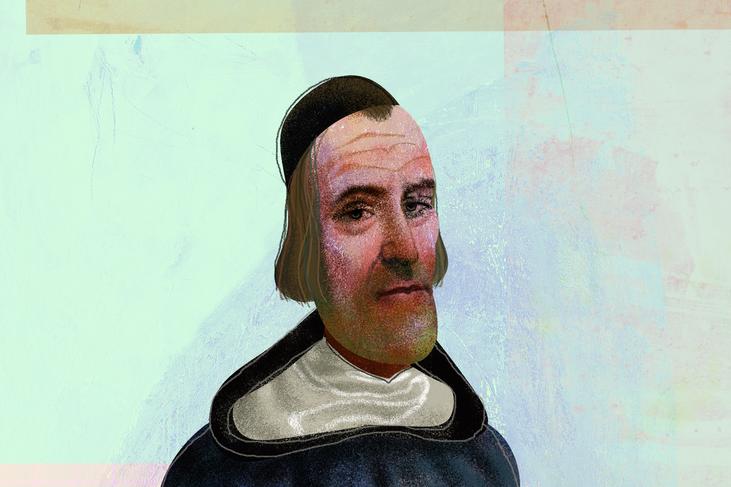 (Dubrovnik, c. 1393 – Lausanne, c. 20 October 1443) Ivan Stojković was born in Dubrovnik around 1393 in the prominent plebeian family. After primary education, Stojković joined the Dominican order. He studied theology and philosophy at universities in Padua (1414 – 1417) and in Sorbonne in Paris (1417 – 1420) supported by the scholarship he received from the Dubrovnik Republic. In 1422, he already received his master’s and doctoral degrees.

Influenced by the chancellor of the Paris university Jean Charlier de Gerson, who espoused the thesis of conciliarism – an opinion that the general Council of the Church was the supreme authority in questions of faith and religious order, Stojković became an opponent of papal autocracy. In 1422, on behalf of the Paris university, he sent a request to Pope Martin V to convene a new general Council of the Church, which the Pope did that same year in Pavia, but because of the plague the location was changed to Siena. At the Council, Stojković had a very important position of general secretary and in his introductory lecture, in the spirit of conciliarism, he argued that the general council was the place to reform the Church “from head to limb.” In 1424, when he came to his native city he proffered advice from the pulpit that Dubrovnik should establish a university like other European cities, however Ragusans chose to continue to send their children to be educated in Europe. In 1427, he became a professor in Bologna, and in 1429 the general procurator of the order. As the companion of Cardinal Cesarini, Ivan helped organize the famous Council of Basel (1431 – 1449), and as his deputy he officially opened the council and presided over its sessions. Although the new Pope Eugene IV objected to the council, and he even disbanded it, the council still continued to operate. The conflict between the Pope, who thought he had autocratic power, and the Council of Basel, whose authority he denied and one of the leading figures of which was our man from Dubrovnik, became a major European question. Because of successful negotiations with the heretics and signing of the Treaty of Prague (1433) with representatives of moderate Hussites, the reputation of the council grew and in 1434, the Pope was forced to approve its work. Interestingly, the Czech heretics (Hussites) called Stojković “their compatriot from Dubrovnik, the city in Croatia.” Even though the conciliarists were successful in their first attempt, they failed in terms of the unification of the Roman and the church in Constantinople. Pope Eugene IV and representatives of the Council of Basel each sent their representatives on a diplomatic mission to Constantinople. Ivan Stojković was one of the council representatives. They spent two years in the mission (1435 – 1437). Even though Stojković lead the negotiations with Emperor John VIII Palaiologos and Patriarch Joseph II, the offer of the papal representatives was accepted. The sensitivity of this diplomatic mission was such that Stojković said in his official report, in front of the councillors in Basel in 1437, as follows: “You sent me, a young beardless man, and I am back grey and with a long Greek beard.” He also showed them the arrow the opposition tried to kill him with, however, it struck his secretary by mistake. Pope Eugene IV used this diplomatic victory to convene the new council in Ferrara, and then in Florence. His papal bull Laetentur Caeli (1439), by which he reinstated the unity of the Roman Catholic Church and the Eastern Orthodox Church in Constantinople, was a dead letter on paper. Those who remained in Basel, among whom was Stojković, elected their own Pope that same year – Felix V. He awarded Stojković with the title of bishop and cardinal (1440). Ivan Stojković died in Lausanne in 1443. During his time in Constantinople, Ivan acquired more than 1,000 books that he brought back to Basel. One of the exceptionally valuable copies was Ptolemy’s Geographia that is today kept in the Vatican Library. One century after he died, Erasmus of Rotterdam came to Basel to study works in Stojković’s estate, considered the greatest and most valuable treasury of Eastern heritage in Western Europe.