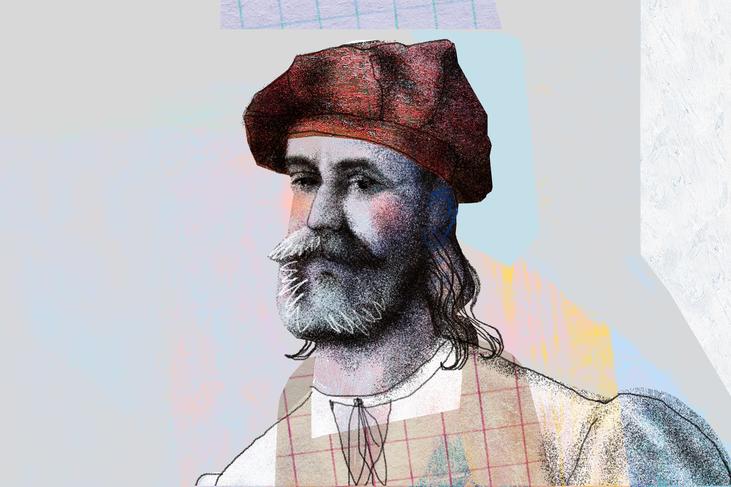 (Zadar, early 15th c. – Šibenik, between 1473 and 1475) Georgius Dalmaticus is remembered for his life’s work – the Cathedral of St. James in Šibenik, that he worked on for thirty-odd years. He was an excellent sculptor and as such created numerous sculptures and decorations of the cathedral, however he had also proven himself to be an innovative builder, because the Cathedral in Šibenik was built using a special system of stone slabs inserted into frames.

We can easily say that Juraj was a true Renaissance man; besides being a sculptor, builder of churches, palaces and fortresses, he lived and worked in several Adriatic cities, he travelled and conducted business, and was a successful merchant who also educated a number of pupils. Precisely because of his intense activity on both sides of the Adriatic that did not recognize communal and national borders, he was named Homo Adriaticus (Adriatic man). As was the case with many other artists of his time, we, unfortunately, know very little about Juraj’s origin and education. It is believed he was born in Zadar and that he spent his youth in Venice, working as an apprentice in the workshop of sculptors Giovanni and Bartolomeo Bon. It is very likely that he worked on some of their notable projects, for example, Porta della Carta, the main entrance to the Ducal Palace. It is obvious, from his work, that in Venice he became well acquainted with contemporary artistic currents and that he adopted the flamboyant Gothic style (gotico fiorito), but was also influenced by the early Tuscan Gothic. A particular creative mixture of Gothic and Renaissance styles would remain the main feature of his entire career, which spanned approximately half a century. When he moved from Venice to Šibenik in 1441, in order to work on the construction of the cathedral, he had already been an established artist who had a workshop and family in Venice. In the next four decades, from Šibenik he would go and work in Zadar, Split, Pag, Ravenna, Urbino and Ancona. Juraj spent about a year in Dubrovnik (1464 – 1465), at the exact time the city was being intensely fortified because of fear of the Ottoman invasion after the fall of Constantinople. In those years, Dubrovnik was inviting the best engineers to give advice and lead the construction of the fortifications, and among them was the famous Michelozzo di Bartolomeo of Florence. It seems that the arrival of Juraj Dalmatinac to Dubrovnik was directly connected to Michelozzo. At the end of April 1464, when the Ragusan Senate refused to debate Michelozzo’s renovation project of the Rector’s Palace, the renowned architect was offended and quickly left the city. As early as the beginning of June, “the master from Šibenik,” as Juraj was called in archival documents, came to take his place. It is, therefore, believed that the quick substitution of two masters was possible because Michelozzo recommended Juraj to the Senate, since it was a common practice that one master, upon his departure, would recommend somebody he trusted to finish his work. Besides, that also represented an indirect confirmation of Juraj’s building skills, since the Ragusans would certainly not have entrusted the defence of their city in such dangerous times to somebody who did not possess substantive knowledge and experience. Still, after the Michelozzo incident, the senators were careful and employed Juraj Dalmatinac only for 4 months, but they were so pleased with his work that, in September 1464, they extended his next contract for a further 8-month period, with a salary of 600 hyperperi per year. Unlike most other cities, where he had worked on individual buildings, in Dubrovnik he had an entire defence mechanism of the city and territory of the Republic of Dubrovnik in his hands. His first job was the renovation of the tower of St. Catherine on the northern side of the city walls. Since his plans or their description were not preserved, it would be difficult to say how much of what we see today was his work, but we can say that he probably furnished this high square tower with interesting openings used for both close-combat weaponry and firearms. Juraj Dalmatinac continued the work Michelozzo started on modernizing the Minčeta Tower, but it seems that the Senate wanted it to remain higher than the experts suggested, despite the already frequent use of firearms. Juraj completed the rounding of the previously square Minčeta Tower, he raised its height and added a vault, and it is presumed that he also conceptualized its crown, i.e. a platform on top of the tower that sits on consoles. Archival documents show that additional work on Minčeta was conducted based on the design and model of Juraj Dalmatinac, despite earlier suggestions by Michelozzo. Besides the work he did on these two towers, Juraj was also employed to work on the renovation of the Rector’s Palace that was damaged in a gunpowder explosion the year before, but we do not know to what extent. His engagement can today be identified mostly in the sculptural decoration of the city’s most important palace. Adjacent to the Rector’s Palace was the city gate that lead to the port (Vrata od Ponte), which “the master from Šibenik” also worked on, he dislocated and renovated it, and his only extant sculptural work in Dubrovnik is connected to this gate. It is the sculpture of St. Blaise, the saint protector of the city, that was installed on Vrata od Ponte, “on the port gate with decorations and in the manner that master Juraj from Šibenik saw fit.” The builder from Šibenik, in his capacity as the master engineer of the state, also visited Ston, the second major city in the Republic, where he offered advice and suggestions for its defence, but his proposals were unfortunately not preserved. It is not very likely that they were executed, since Juraj Dalmatinac left Dubrovnik in early summer 1465, probably because of the plague epidemic that broke out in the city, which concluded the short, but intense Dubrovnik episode of one of the greatest Croatian builders and sculptors.