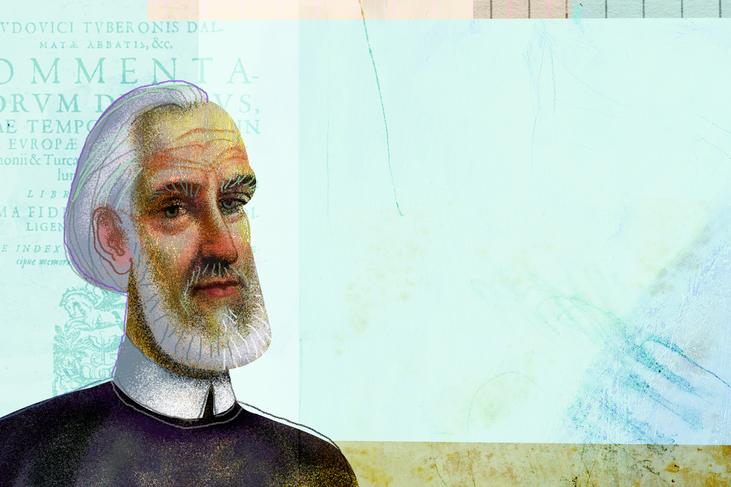 (Dubrovnik, 17 October 1458 – Dubrovnik, June 1527) The renewal of the classical idea of education through the study of humanities rests on the assumption that with correct upbringing and education man can be perfected in those things that are specific to human beings. In that sense, study of the humanities, with grammar, rhetoric, poetics and moral philosophy, rekindled an interest in historiography. Humanists from Croatia, particularly Dalmatia, entered this Renaissance-Humanist circle very early on.

They were interested in the present and they were trying to understand it by studying the past, but this study had more of an ethical than a scientific basis. One of the greatest among them was the Dubrovnik Benedictine Ludovik Crijević Tuberon, the oldest and first Croatian historian who studied medieval Croatian history from its beginnings to his own time. He was born in 1458 in Dubrovnik as the only son of the patrician Ivan Crijević (Cerva) and Frana Kaboga (Caboga). He received his primary education in the city of his birth, after which he left for Paris. He studied literature, philosophy, mathematics and theology at the Sorbonne. During his studies, he was nicknamed Tuberon, after the Roman historian Quintus Aelius Tubero, obviously because of his great interest in history. In 1483 or 1484, he returned from Paris. Although he was engaged to Maruša Đurđević (Giorgi), he did not marry, because that same year, i.e. in 1484, he retreated from secular life and became a priest. He did this, allegedly, because he was unable to stand public shame after Dubrovnik authorities issued him a fine and cut the long robe that he wore around the city – as was the style in Paris fashion of the time. This, however, was probably not a decisive factor in his decision. Tuberon retreated to the Benedictine monastery on the nearby islet of St. Andrew and spent the next eighteen years in prayer and studying literature and works by Roman historians. In 1502, he moved to the monastery of St. Jacob, in the immediate vicinity of Dubrovnik, where he remained until his death. In 1508, the Senate have Tuberon permission to travel to Hungary. He stayed with his friend, Archbishop Grgur Frankopan of Kalocsa, who encouraged him to write his famous work Commentarii de temporibus suis. Tuberon dedicated the book to him as a sign of gratitude. In 1515, the Senate decided he should become the vicar to the Archbishop of Dubrovnik. Sources say that Crijević also aspired to become archbishop himself, and in 1525, he was prepared to pay the cost of 500 ducats to separate the Ston diocese from the island of Korčula, on condition he became the bishop of that diocese. His Commentaries, which are composed of eleven books, describe the historical period between the death of King Matthias Corvin (1490) and the election of Pope Hadrian VI (1522). Commentaries are also full of excurses into deeper history, so Ludovik wrote about the history of Dubrovnik from its founding, as well as the development of the Ottoman state. Tuberon described the Ottoman conquests, the League of Cambrai and the peasant revolt in Hungary, as well as the fall of Belgrade (1521) into Ottoman hands, considering this event to be a greater loss to Christian interests than the fall of Constantinople. He also developed psychological profiles of historically important individuals in the Commentaries, for which reason his work was subjected to censorship. So, because of the negative opinion about Pope Alexander VI, whom he openly accused of simony or crimes, in 1734 his book was listed in the Index librorum prohibitorum. Tuberon expressed his thoughts on the mindset of different nations, geographic and ethnographic information and some interesting anecdotes and, although he never specified historical sources, it is clear from the written text that he used them abundantly. Ludovik Crijević Tuberon died in Dubrovnik in 1527, probably of plague.