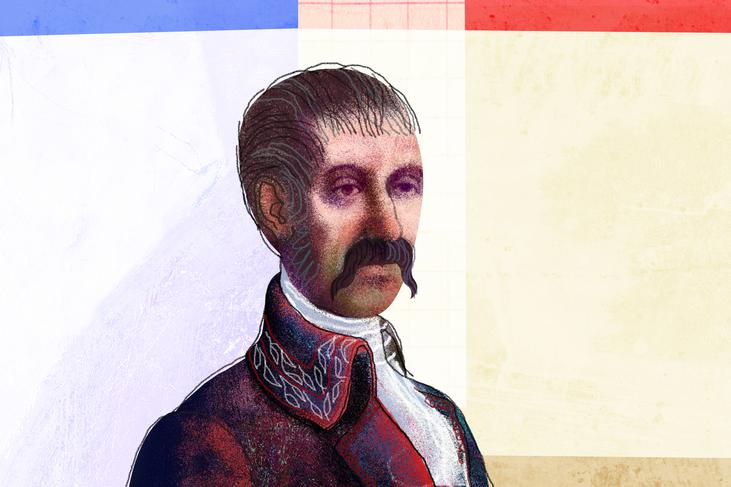 (Tours or Lyon, c. 1770 – Cyprus, 25 November 1823) Marc Bruère Desrivaux was a poet and a diplomat. He came to Dubrovnik as a boy with his father René, the French Consul, where he received an excellent education. He was taught by the famous poet and Latinist Đuro Ferić, who is better known for his Latin than his Croatian poetry.

He attended the Piarist school, and he spend some time in the monastery in Ravenna. He wrote in his mother tongue, French, as well as Latin and Italian languages, but he quickly mastered Croatian and wrote his best work in that language. He learned how to write poetry from Đuro Hidža and Medo Pucić. He became a member of the French diplomatic service in 1793. He spent the next four years in Travnik as the French consular agent. Upon his return to Dubrovnik in late 1797, he first helped his father and was then appointed vice-consul and vice-commissioner. As a diplomat, he also spent some time in Shkodër, then again as a temporary consul in Dubrovnik in 1816, and in Paris. On his way to Tripoli in Syria, where he was nominated a consul in 1823, he became ill and disembarked in Cyprus where he died. In addition to diplomatic and political activities, Bruerović spent his entire life writing, and the sum of his literary work is related to Dubrovnik. He first started writing panegyrics, epistles and religious poems, mostly in Italian and later he started writing predominantly in Croatian. His poems/epistles reflected life in Dubrovnik, its conditions and customs, and he sent them to his friends and wife. He also wrote kolenda Christmas carols, a traditional lyrical form in Dubrovnik, that were influenced by the Italian language. He is the author of carnival songs entitled Zvjezdoznanci, Čupe, Spravljenice and a comedy Vjera iznenada, whose plot is set in the upper echelons of Dubrovnik society. He wrote down folk poetry and translated it to Italian and French languages, and he also translated poetry by Propertius, Catullus, Martial, and one comedy by Plautus, and the popular Hasanaginica. His works were published by Antun Kaznačić and Medo Pucić; the latter published several panegyrics, epistles and kolenda Christmas carols in the first literary magazine in the Croatian language in Dubrovnik – Dubrovnik cviet narodnog knjištva. His contemporaries pointed out that this French man became so at home in Dubrovnik and learned Croatian so well that he preferred the vernacular Croatian language, while so many “Slavs” still favoured and earned their fame in Latin, Italian, German or French. He was at the head of those who would popularize the vernacular, and prevail over foreign languages, so they often pointed out “that this is why he was a better Ragusan than many who were so by birth.” They commended how at home he was in Dubrovnik and how he adopted local traditions and customs, so one of his teachers, Orsat Medo Pucić wrote that, living in Dubrovnik, Bruerović “… adopted our customs and started writing our songs, so that during festive occasions this Frenchman was more Ragusan than were the Ragusans themselves.” When we analyse his epistles, his lyrical language reveals the influence of folk poetry. This influence can be seen in the lexicon and syntax, and he uses verses of some popular proverbs: “Ono sinje more, grada bijeloga,” “Žalostna ti majka!” “Znaj da svěstno ni koristno nije,” “Bolje ištuć dobro ostaviti,” “Tvérda ti je věra,” “Jednom gradi drugom razgradjuje,” “Tko ga pozna věrovat mu neće,” which confirms his familiarity with the language, local atmosphere, history and tradition. Marko Bruerović’s work faithfully illustrates the spirit of Dubrovnik of the time and presaged Croatian national romanticism. Following the death of his first wife, whom he married in Travnik in accordance with local customs, he fell in love and married his maidservant Mara in Dubrovnik and wrote love poems to her all his life.