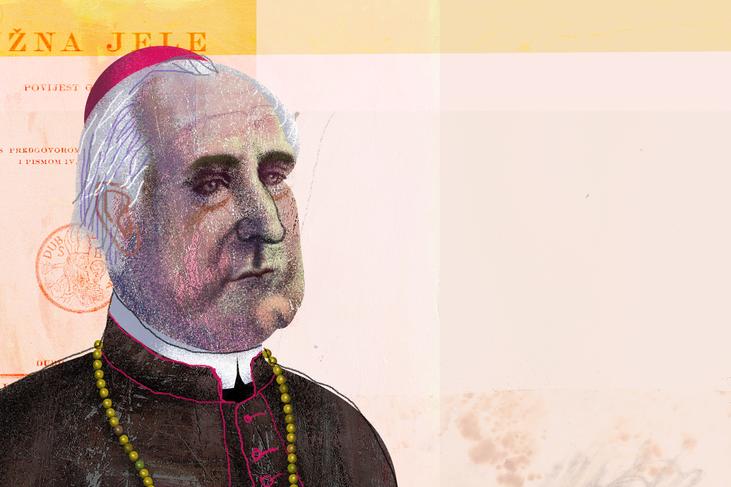 (Dubrovnik, 13 December 1816 – Dubrovnik, 13 March 1893) The Dubrovnik Bishop, theologian and writer Mato Vodopić was born in the family of the naval captain Nikola and mother Jela, neé Maškarić. Instead of life at sea, dum Mato as he was fondly called, chose to become a priest and after studying theology in Zadar, he spent his life in various parishes where he was well-respected, while the sea remained his powerful and constant inspiration and theme.

He spent twelve years in Gruda, in the region of Konavle, and then he came to Gruž and became the Bishop of Dubrovnik in 1822, as the first local bishop after the fall of the Dubrovnik Republic. In 1890, he celebrated a Golden Jubilee Mass – i.e. fifty years in the priesthood. He suffered a stroke and died in 1893, and he was buried in the Dubrovnik Jesuit church. Today, his grave is located in the Church of St. Michael in Lapad, and he was among those who found lasting peace in the shadow of cypress trees at St. Michael’s. When historian Josip Bersa described him, he emphasized that such moral strength emanated from him that it allayed any excess fervency and smoothed every roughness. He possessed an unspoilt freshness of spirit, purity of thought and amazing calm in the face of unavoidable sorrows, because he learned at an early age that “difficulties come as often as we break bread.” Life in Konavle, the beauty of its customs, traditions and beliefs inspired him to write Marija Konavoka, a story about life in Konavle that describes everyday life of people who do rough farming work, but also celebrate holidays, christenings and weddings. Konavle toasts were always famous, and Vodopić used one of them in his work: “Objed dobar, sreća bolja, pošten domaćin, veseli mu prijatelji. Prijatelji dolazili, a domaćina u lijepom zdravlju vazda nahodili. A ovo krsno ime, koje junak slavi, da Bog da ga proslavio sa mirom božijim, sa časom dobrim; vazda mu junaku veselo dolazio, a u boljemu ostavljao za puno ljeta i veselih godina, ako Bog da. Zdravo, gospodine paroče, zdravo domaćine, zdravi domaćinovi prijatelji, i ja s vama!” His story Tužna Jele (Sad Jele), about an unhappy woman who is aggrieved after the sea took her two sons, and is waiting for the return of her husband, is imbued with Christian spirit, authentic atmosphere of Gruž and the vernacular language, and it describes one of the great themes in European literature – the theme of waiting. The attribute “sad” defines the predominant mood of this first realistic novel – sadness, solitude, silence and fear of death. “Svaku povijest trebaje nekako zaglaviti, moja je zaglavljena sa žalosnom smrti Jelinom, i tamo preko smrti što ćeš veće tražiti?” Mato wrote this “true story” based on the testimony of Jele’s husband Jozo Baldov and a boatman from Gruž called Miho, and he used the archive of the Gruž-Lapad parish where he served. He described a difficult life inextricably and faithfully linked with the sea, the sea that giveth and taketh away. As a writer, he focused on the little man, his fate, difficult life, fears, hopes and expectations. He knew how to live and empathize with people, he understood their problems, admired their strength and tenacity in the face of difficulty, so he can truly be called the “painter” of life in Dubrovnik.