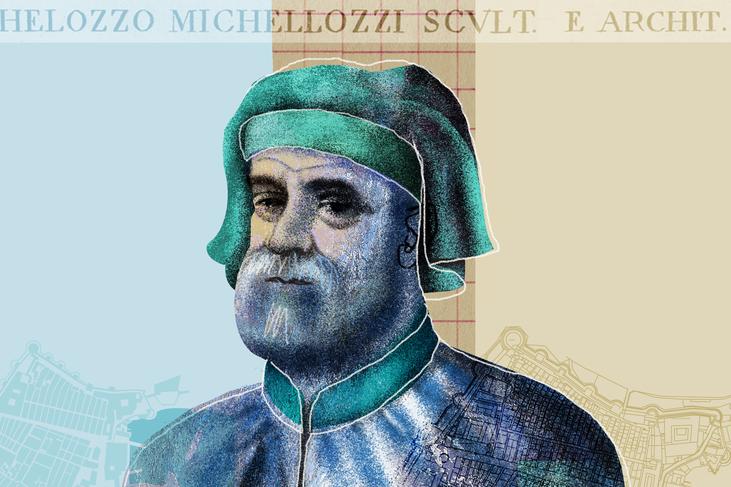 (Florence, 1396 – Florence, 7 October 1472) After the fall of Constantinople under Ottoman rule in 1453, Ragusans feared for the safety of their city even though it already had well-fortified walls, but they were, however, somewhat outdated because of the emergence of new weapons and methods of warfare. Since Ragusans were always trying to employ the best masters they could find, they invited Michelozzo di Bartolomeo from Florence to come to the city to reinforce the city fortifications and make them more modern.

We should mention that Michelozzo was, by that time, somewhat of a star among European engineers and builders – not only did he work with the famous Renaissance masters Ghiberti and Donatello, but he enjoyed the special favour of Cosimo Medici the Elder, the most powerful man in Florence, who employed him in many of his important projects. Ragusans were well aware of Michelozzo’s qualities and reputation, evidenced by the fact that they offered him the second largest salary ever given to an employee of the Dubrovnik Republic; 20 ducats per month, i.e. 240 ducats per year; the only person with a higher salary was builder Onofrio della Cava.

Michelozzo spent a short period of time in Dubrovnik between 1461 and 1464, and as Dubrovnik’s military engineer he was obliged to supervise all fortifications works in the City and the Republic, provide advice, proposals, evaluations, design plans and projects, make decisions as he saw fit and/or execute the orders of the government of Dubrovnik. Michelozzo immediately started working on reinforcing the northern part of the city walls, so during 1462 and 1463 he intensely worked on the Minčeta and Bokar fortresses, then he spent one year improving the defence mechanisms of the city of Ston and he offered a proposal for the extension of the Sokol Fortress in Konavle. In 1463, he worked on the northern section of the city walls, but it seems that project was not accepted, so that same year he started working on the western section of the city walls, especially the reconstruction of the Puncjela Tower, to which he added a covered hallway. During his stay in Dubrovnik there was a gun powder explosion that caused serious damage to the Rector’s Palace that had recently been refurbished according to Onofrio’s concept, so Michelozzo proposed his renovation. However, even though the architect of one of the most famous 15th century Italian palaces (Palazzo Medici Riccardi) was in their midst, the government of Dubrovnik did not even discuss his proposal (!), and Michelozzo, probably offended, left Dubrovnik for good. The fact that this was not the first time his Ragusan clients rejected proposals and projects by the famous Florentine certainly contributed to such an outcome. His contributions to the construction and improvement of Dubrovnik’s defence system was truly exceptional. Specifically, middle of the 15th century was a transitional time when everyone wanted to lower the height of medieval towers and demolish lighter fortifications or modify them for firearms and projectile strikes. However, even though they followed contemporary trends in weaponry and were among the first to acquire firearms, Ragusans wanted to find some “middle ground,” because they knew that the Ottomans did not completely abandon close-combat warfare. In that sense, Michelozzo proved to be, not only adaptable, but also a creative engineer, who gave the region he worked for what they needed; he united both methods of warfare into one defence mechanism that was supposed to function together. He preserved the high and beautiful medieval towers that continued to be used, but he supplemented their defence by reinforcing the basic structure of the bottom section of the walls. He connected all levels of tower spaces with the walls through a stairway system, by which he enabled the usual frontal defence, but also the defence of the lateral and ground-level zones. However, his greatest accomplishment was the transformation of the Minčeta Tower. This impressive fort is located at the intersection of the western and northern section of the main city wall, which is also the highest point in the city, and the tallest fortress (25 m). Its construction started in 1319 and, originally, it was a high square tower with two platforms. Because of adjustments to firearm warfare, a decision was made in 1455 to transform Minčeta and modernize it by lowering its height and making it round. When he came to Dubrovnik, Michelozzo found works on Minčeta ongoing and he developed a plan for its reconstruction to enable simultaneous defence against both methods of warfare (close-combat and firearms). He doubled the area of the upper round platform (from 18 to 36 metres), so it could accommodate the artillery, and he positioned the closed bulwark inside the fortress at three levels (the three interior floors). The closed bulwark is composed of a circular hallway from which funnel-shaped casemates extend radially, that were envisaged so that archers are able to stand and shoot arrows, but were also equipped for cannon fire. Each casemate was equipped with a chimney for ventilation, so that it could air quickly after cannon fire. Originality of this solution did not only lie in the overlap of different defence plans, but particularly in the idea of ring-shaped hallways with casemates, located one above the other in the interior of the fortress. As a curiosity, we should also add that Michelozzo developed this system in Minčeta almost twenty years earlier than it was used in a fortress in Ostia near Rome, which the literature often considers the first casemate fortress of the kind.