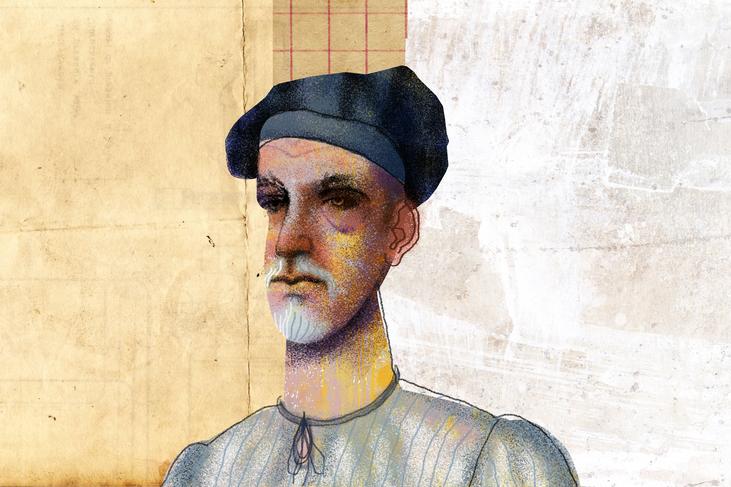 (Dubrovnik?, c. 1465? – Dubrovnik, end of 1517?) Nikola Božidarević is one of the symbols of Renaissance painting in Dubrovnik. Some called him “the legendary artist (…) who became the hallmark of an entire period of national painting,” and he attracted the attention of experts for a long time. Nevertheless, many things about his life and work still remain unknown. He was the son of painter Božidar Vlatković who hailed from the village of Kručica in Dubrovačko Primorje, but we do not know for certain where Nikola was born; it is possible that it was Kotor.

As a young man, after only 4 months of apprenticeship he left the painter he was studying with and moved to Italy in 1477. We do not know where he continued his education of where he lived during the 17 years he spent in Italy. Of the total of 16 known works attributed to him, 10 were lost, but luckily, we have archival information about them. Today, there are five extant complete works by Božidarević, three of which are kept in the Dominican monastery in Dubrovnik; the triptych from the Bundić family chapel, altarpiece of the Annunciation painted for Captain Marko Kolendić, that was originally located on the island of Lopud, and altarpiece for the family Đorđić (Sacra conversazione). In the picturesque Church of Our Lady of Danče, on the side altar, we find the triptych of the Virgin with Saints, the triptych for cobbler Đuro Božidarević is located in the Franciscan church of Our Lady of Špilice on the island of Lopud, and based on recent findings he also painted an addition to the older icon of the Virgin and Child in the Church of St. Nicholas at Prijeko, which would be his sixth extant work. We have to point out two crucial facts from Nikola’s artistic activity; that he was born in an artistic family – his father was a pupil and collaborator of Lovro Dobričević and was probably influenced by him – and he spent many years in Italy where he was educated, we still do not know with whom, and formed his own style. We can only assume, from his style, where in Italy he lived and studied painting; most likely he spent time in Venice, Marche, Umbria and Rome. He definitely saw many artists and schools of painting, on which basis he formed his personal style, but he was also partly influenced by local tradition. He returned to Dubrovnik as a mature person who accumulated all these experiences and started receiving many commissions (because he worked with his father for a while) from prominent clients. Owing to a fortunate combination of his artistic talent and diverse experiences acquired in Italy, Nikola adopted some typological characteristics of the earlier Dubrovnik painting and introduced some Renaissance novelties. An entire gallery of Renaissance Dubrovnik figures stare at us from his paintings, and their physiognomies, rich draperies, his mastery of perspective… all confirm his painterly quality. Judging by some commissions, Nikola was also supposed to make, carve and gild the frames of some works that he painted, so we can assume that he was skilful in that segment as well.

We know enough about his life to conclude that he was a successful businessman of his time and social class; in 1507 he rented from the municipality a residence on the uppermost floor in a house at Placa (Stradun), besides the Franciscan church, where it is assumed he already had a workshop. We also know that for fourteen years he welcomed pupils to his workshop, he looked after them, fed and clothed them and taught them the art of painting. He probably brought back from Italy a collection of medals, drawings and antiques, because in the January 1518 document that examined his estate, his father and brother addressed the court with a request to question witnesses about different items, money, gold medallions and paintings that seem to have disappeared from his workshop. On that occasion, a drawing of St. Joseph was found among his possessions, probably a study for the altarpiece of St. Joseph in the Dubrovnik Cathedral, which he was commissioned to do a few months earlier, but was interrupted by death.

He holds an unquestionable primacy among Renaissance painters in Dubrovnik, but we should also mention that he had a vivacious character and was a bit of a jokester, because in 1509 he was sentenced to (as long as) three months in prison for publicly singing vulgar songs during the carnival.