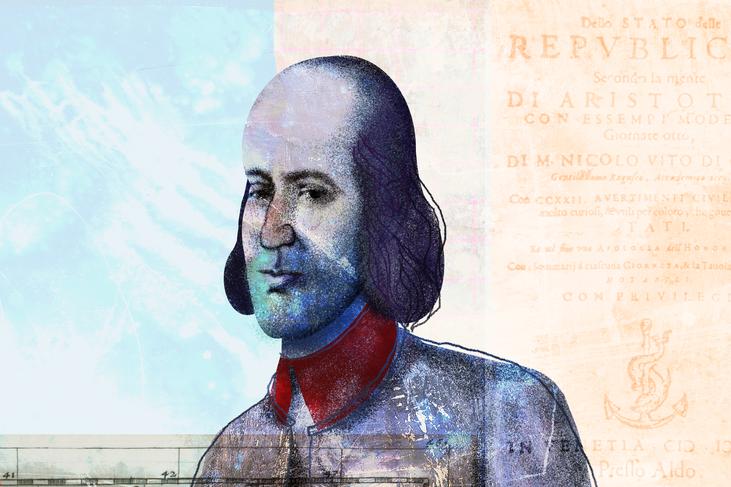 (Dubrovnik, 1549 – Dubrovnik, 24 January 1610) The time of Late Renaissance (16th c.) in Croatia produced an abundance of works and authors, who were not recognized only locally, but in a broader European cultural context. Centres of philosophical thought in Croatia were primarily cities on the Dalmatian coast. So, in Dubrovnik we encounter philosophers Miho Monaldi, Antun Medo and, as the most important, Nikola Gučetić (Gozze).

He was born in Dubrovnik in 1549 as the son of Vito Gučetić and Marija Gundulić (Gundula). As a patrician, he became a member of the Major Council when he came of age in 1569. In the service of the Republic, he was elected Rector as many as seven times. He married Marija Gundulić (Gundula), a noblewoman. Gučetić acquired primary humanist education in his native city. In this early period, he was a member of the theatre company Gardzarija, where he acted in the role of a player of wind instruments, in a drama written by Marin Držić, who was still alive at the time. The question of his higher educational status remains open to this day. Because of his prolific philosophical and theological ideas, he was a member of two Academies, and Pope Clement VIII awarded him the title of doctor of philosophy and theology. He started his philosophical activity at age 21; with a commentary on the work of the Arabic Aristotelian philosopher Averroes. In the next ten years Gučetić devoted himself to serious philosophical study, and he published the aforementioned commentaries with the discussion on the pseudo-Aristotelian work on causes and the debate with Alexander of Aphrodisias on issues of immortality of the human soul, as late as 1580. In this period, Gučetić also tried his hand in Platonic dialogues, so in 1581 he published two dialogues: Dialogue on beauty (Dialogo della bellezza) and Dialogue on love (Dialogo d'amore). In them, the main characters are two women; his wife Marija (Maruša) Gundulić (Gundula) and Cvijeta Zuzorić (Zuzori). This affirmation of women in philosophy continued in his next published work from 1584; About Aristotle’s Meteors (Sopra le Metheore d' Aristotele). Gučetić’s wife wrote a dedication to her friend Cvijeta Zuzorić in the first edition of the book. The dedication was an expression of loyalty and defence of Cvijeta’s “honour, beauty and virtue” from slander and a courageous public act before “horrid sounds of wolves, bears and tigers.” Obviously, self-confidence of these women provoked revolt in the traditional Dubrovnik society, so the dedication was shortened in the second edition and controversial sentences removed from the text. The work also contains the renowned scientific descriptions of two caves in the vicinity of Dubrovnik, so Gučetić could be considered the founder of speleology in Croatia. After his natural history phase, he turned to political issues. In 1589, he published the work entitled Governo della famiglia – the first pedagogical work in Croatia. In 1591, he published his main political work On the Structure of States (Dello stato delle republiche secondo la mente di Aristotele con esempi moderni). This was the first systematic work of political philosophy and issues of state in this region. He recognized ethical principles of action as the basis of good governance, in accordance with the greatest good and knowledge of the time, and he tried to establish the philosophy of state drawn from the political practice of the Republic of Dubrovnik. The work Apologia dell'honor civile was his last work in the cycle of political writings. In his final phase, Nikola mostly dealt with issues of philosophy and theology, and he openly advocated Counter-Reformation opinions in his interpretation of the psalms. His final works, extant in manuscript form, provides testimony on the most intimate interests of any man who is approaching the end of his life – problem of the soul and its immortality.