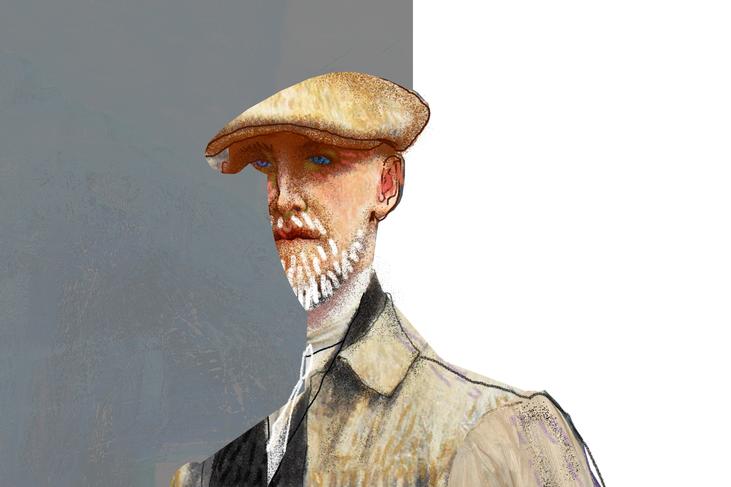 (Cavtat, 4 July 1855 – Prague, 23 April 1922) Vlaho Bukovac is definitely one of the most important Croatian artists. And he enjoys this status in our history of art not only for his exceptional artistic talent, the ease with which he painted and the large number of paintings that he created during his lifetime, but also for his social status. Bukovac was our first modern artist whose work made possible the acquisition of his own palace in the centre of the capital city, and who, as an intellectual, attained a high social status and recognition.

Earlier periods of his life, though, are reminiscent of a novel by Dickens. After spending a carefree childhood in his native Cavtat, as an eleven-year-old his uncle took him to New York, to educate and find him employment. After his uncle suddenly died and his widow remarried, little Vlaho, in a foreign country and as a victim of family intrigue, ended up in a juvenile reformatory. It was there that a teacher noticed his artistic talent and he asked him to draw a portrait in front of everybody. In a twist of fate, this was his first public accolade. After the misunderstanding in America was resolved, Vlaho returned to Cavtat to his parents, then he spent about one year as a cadet on a ship, but an accident decided his future fate; one night as he hurriedly carried plates across the deck, he failed to see a hole underneath and fell deep into the ship’s hold. After he barely managed to recover from a difficult injury and after a period of rest in Cavtat, he decided to travel across the ocean again. He lived and worked in Peru for a year, and after that he spent two years in San Francisco. This is where he started to earn money painting bourgeois portraits, but he eventually decided to return home for good after concluding that “America was a good school but only for merchants.” However, the adventure was not over yet, because the train that Bukovac travelled to New York with, capsized and a lot of people died, but this time he was one of the few who remained unscathed.

In Dubrovnik, Count Medo Pucić (Pozza) noticed his talent and helped him financially, so with this help, Bukovac started his education in Paris in 1877. He studied in the École des Beaux-Arts with a renowned painter Alexander Cabanel (1823 – 1889), a leader of French academic painting. Thus, Vlaho achieved his goal – to work as a professional painter – and since then, it seems, he had a string of successes in life. As a student he exhibited in the famous Paris Salon (painting entitled Montenegrin Defence, 1878), and throughout the period he spent in Paris, i.e. until 1893, he regularly participated in exhibitions and received excellent critical and public reception. This should not surprise because he possessed an exceptional painterly skill and an ability to skilfully model the expressive quality of character, so he built a particularly great reputation as a portrait painter. At the same time, he was developing painting in plein-air, using a lighter palette and softer brushstrokes. At the urging of the then Croatian Minister of Culture, Izidor Kršnjavi, he left France and moved to Zagreb in 1893, where he soon became one of the main protagonists of artistic life. He exerted crucial influence on a younger generation of Croatian painters (Čikoš-Sesija, Iveković, Tišov, Kovačević and, to some extent Medović), and as a central figure

Vlaho Bukovac is definitely one of the most important Croatian artists. And he enjoys this status in our history of art not only for his exceptional artistic talent, the ease with which he painted and the large number of paintings that he created during his lifetime, but also for his social status. Bukovac was our first modern artist whose work made possible the acquisition of his own palace in the centre of the capital city, and who, as an intellectual, attained a high social status and recognition.

of artistic life in Zagreb at that time, he encouraged the construction of a studio for artists and the Art Pavilion, he founded the Society of Croatian Artists and laid the foundations of a new artistic style – the Croatian modern painting. During the Zagreb Period he painted several large-scale compositions (Gundulić’s Dream, Dubravka), a ceremonial curtain for the Croatian National Theatre in Zagreb (Croatian Revival), and he also created a large number of excellent portraits of members of the Zagreb high society. He is the author of one of the paintings in the Golden Hall of the Department for Religion and Education (today: Ministry of Culture) in Opatička Street, and the painting Development of Croatian Culture for the new National and University Library. Vlaho was, of course, not spared his fair share of challenges and disappointments so after disagreements with official factors in the cultural scene he left Zagreb and lived in his native Cavtat from 1898 to 1902, where he refurbished his family home and the studio. Even though he was considering a career as a professor in several European cities, eventually in 1903, via Vienna, he moved and started working as a professor at the Academy of Fine Arts (Akademie výtvarných umĕni) in Prague. He spent the remainder of his life in Prague devoting himself completely to educational work and exhibiting occasionally with Croatian and Czech artistic associations. Besides being the first Croatian artist to show in the Paris Salon, he was awarded several medals and became a member of several academies, and he was the most striking figure in Croatian artistic life at the turn of the 20th century who created the foundation of Croatian modern art.