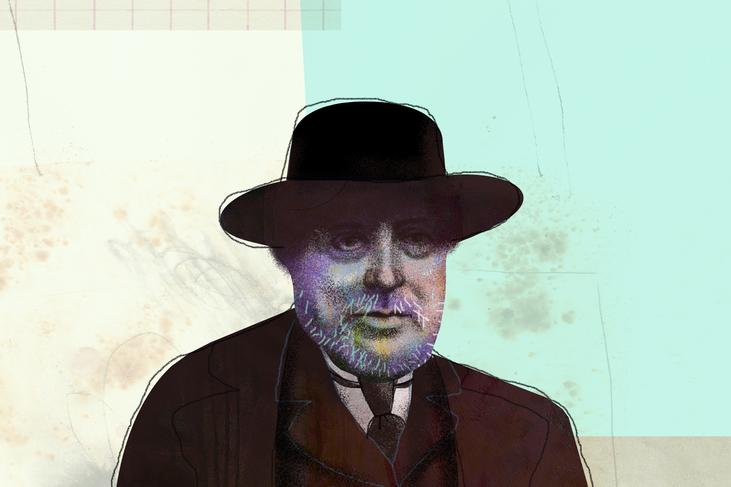 (Dubrovnik, 27 September 1837 – Dubrovnik, 16 January 1907) The figure of a blind street singer, amateur-actor, singer of kolenda traditional Christmas carols and a street merchant, certainly deserves a place in the gallery of idiosyncratic Dubrovnik characters. He was a person who lived, seemingly, on the “margins” of Dubrovnik society, but who definitely left an indelible mark in his time. The scant information we have about his life tells us that he spent a poverty-stricken childhood with a mother who was originally from Malta – so they called him Vlaho Maltez, his father was a mariner and he had two sisters. In the first months of his life he suffered from seborrheic dermatitis, and because of poverty and incorrect treatment it resulted in permanent blindness.

In late 19th and early 20th century, Vlaho Obuljen left a mark in Dubrovnik’s daily life in several ways. Vlaho the Blind was one of those “originals” of Dubrovnik; those special, singular, original people who reflected the city and echoed its Mediterranean, Felliniesque atmosphere and culture of living. He was also much more than that, as evidenced by the verses in his kolenda traditional Christmas carols, that survived to this day and were written down exactly as he spoke them – as part of a long tradition of Dubrovnik’s Christmas carols. “I had a magnificent voice, and would never miss a single note. I stayed a baritone after trying to reach soprano notes, but they were not for me,” said Vlaho in his songs and his contemporaries agreed. They remembered watching him sing, surrounded by the delighted citizens; he kept rhythm by lightly striking the cobbled pavement with a cane held in his left hand. However, Vlaho did not only reproduce traditional folklore kolenda carols, he also composed them. He was considered a poet and the “last troubadour of Dubrovnik” who composed many love poems. A familiar sight on Dubrovnik’s streets, Vlaho the Blind would shout “Iglica i traka, konca i bumbaka!” – and sell his goods following an established itinerary. He carried an entire shop with him in two heavy soklin (bags). He sold thread, rosaries, combs, kurđelice (narrow women’s belts), hairpins and corals. Buyers could not easily swindle the blind merchant; he was an expert in telling money apart, and he could tell the correct colour of the thread by feel! Contemporaries described him as a blind old man with a shaved face, of medium build and with a large head full of hair and thick eyebrows. He was a thrifty, somewhat frugal man who pinched his pennies. Despite being poor he liked to dress well! Biological predisposition did not prevent him from having love affairs. Vlaho’s wives were Cvijeta, Lucija, Đive and Ane; the first one from Župa, the second from Konavle and the last two from Dubrovnik. They turned him, he said, into a martyr; he often complained of his spouses, and even though he was an honourable and God-fearing man, the public and chroniclers describe him as angry towards women – they say he starved them! “He would buy two kilos of picarel fish, fry an entire bowlful and lock it, then give his wife one picarel for lunch and one for dinner.” Vlaho Obuljen was also an actor. In April 1903, he performed on stage at the Teatro Bonda in the first performance of Vojnović’s drama Equinox, where he played himself because he was one of the characters in that drama. The fact that he became a literary character, and then also an actor on stage, only confirms the multitude of roles he had in Dubrovnik of the time. In conclusion, here is another anecdote from the life of Vlaho the Blind; when the director of the play paid him a fee for his performance – he was the only one in the entire ensemble who was paid – he told the director: “Sir Ile, thank you, and I hope that this will neither be the first nor the last time. If you should require, and if you give me someone else to play, but myself, I would like you to know that I am always ready.”