Mirko Ilić: The Second Before the Catastrophe – Comic Strip, Illustration and Design 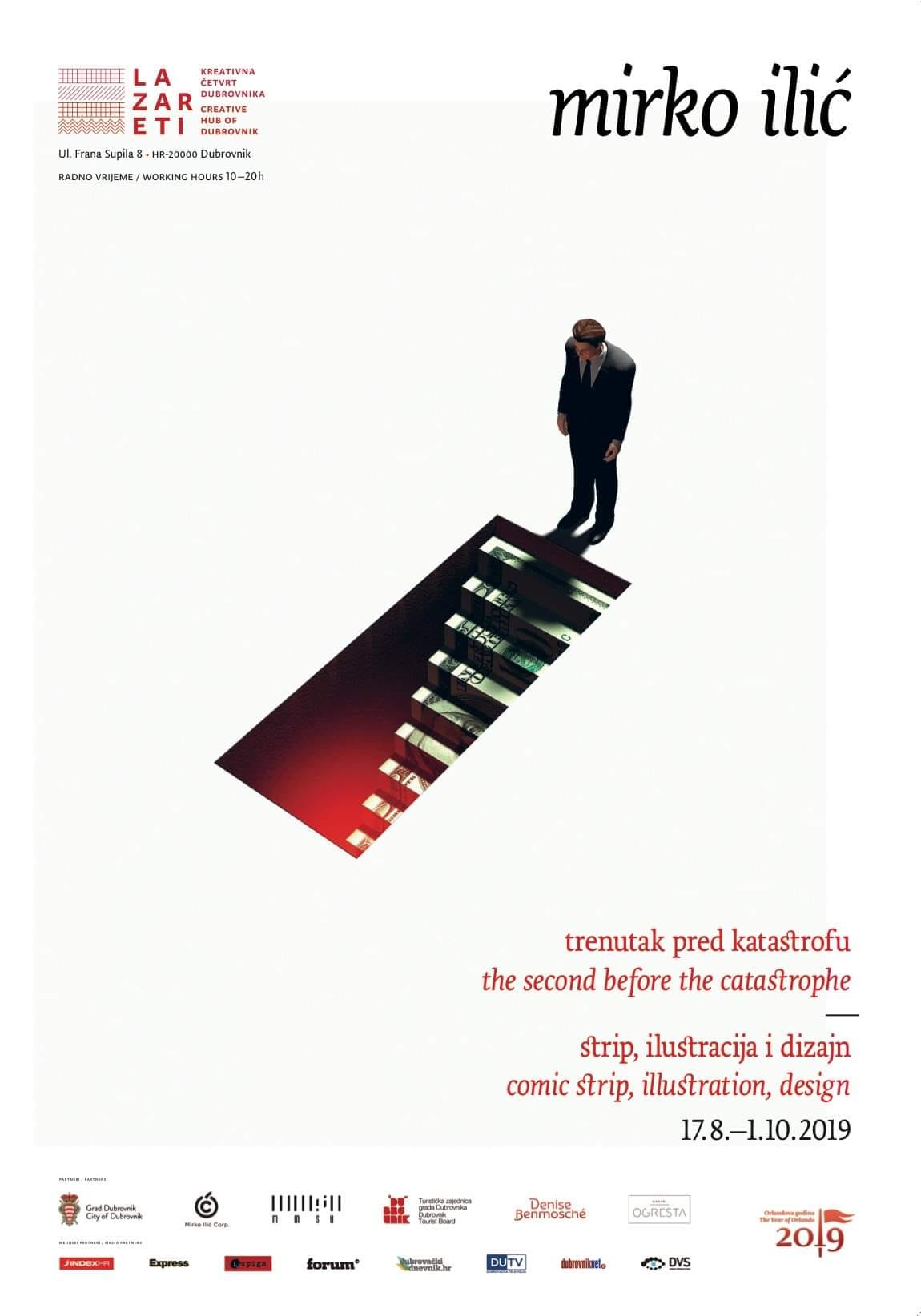 15:45
3 sata
L4 - Multifunctional Hall 4
slobodan ulaz /free entrance
Minimal age
15 godina
With the exhibition Mirko Ilić: The Second Before the Catasrophe – Comic Strip, Illustration and Design curated by Marko Golub & Dejan Kršić Dubrovnik public will have a chance to find out why is Mirko Ilić after more than four decades still one of the most interesting graphic designers and illustrators and why he is a global star.

In Lazareti – Creative Hub of Dubrovnik comic strips, illustrations and posters from different phases of Ilić's carrier will be exhibited, most of them from last 10-15 years.

According to Kršić&Golub, wherever we may happen to find ourselves in the huge illustration, design and comic strip oeuvre of Mirko Ilić, we shall come upon powerful and memorable images, complex thoughts conveyed in pithy, effective and communicative ways, an artist capable of summoning up the most dramatic understandings of the world in which we live without a bit of literalness or superficial expressiveness. Ilić, for example , by “illustration” does not illustrate an event, a proposition or an opinion, rather gives us an image that drives out thinking about topic, as a cog drives time in a clock movement, gives us an unexpected angle on a topic that a moment before we had imagined we knew enough about.

The public in Lazareti will also be able to enjoy other aspects of Ilić’s professional activity besides comic strips, illustrations and posters, especially theatre posters, from different phases of Ilić's carrier; they will get to know him as an initiator, curator and explorer, which is seldom presented alongside his design works. Nine of HIS books on design, mostly co-authored with Steven Heller have been published up to date: starting with ‘Genius Moves: 100 Icons of Graphic Design’ (2001.), ‘Handwritten’ (2004.), ‘Design of Dissent’ (with Miltonom Glaser, 2005.), ‘Anatomy of Design’ (2006.), ‘Stop, Think, Go, Do: How Typography and Graphic Design Influence Behavior’ (2012.), ‘Lettering Large’ (2013.), ‘Presenting Shakespeare: 1,100 Posters from Around the World’ (2015.), ‘Head to Toe: The Nude in Graphic Design’ (2018.) including the much enlarged and thematically updated edition ‘The Design of Dissent’, subtitled ‘Greed, Nationalism, Alternative Facts, and the Resistance’ (again with M. Glaser, 2017.).

Mirko Ilic (BIJELJINA,1956.). graduated from the School of Applied Arts and Design in Zagreb, where from the mid-1970s to mid1980s he published comics, and did illustration and graphic design for a wide range of clients --- from youth press, record companies and theatres to influential political magazines and newspapers. He arrived in the U.S. in 1986 and was commissioned as an illustrator for many of the major magazines and newspapers in the U.S. and around the world. In 1991 became Art Director at Time Magazine, in charge of International editions, and in 1992 became an Art Director of The New York Times Op-Ed pages. In 1995 he established Mirko Ilic Corp, graphic design and 3 – D computer graphics and motion picture title studio. His company designs for a wide range of clients, from pro bono organizations to the high luxury hospitality clients and is especially known for its strong visual concepts. Mirko is the co-author of 10 books with Steve Haller, including Genius Moves: 100 Icons of Graphic Design, Handwritten, The Anatomy of Design, Stop Think Go Do, Lettering large, and Presenting Shakespeare. With Milton Glaser he is the co-author of the book The design of Dissent. For his work he received numerous awards from Society of Illustrators, Society of Publication Designers, Art Directors Club, I.D. Magazine, Society of Newspaper Design, and others. His work is in collections of institutions such as Smithsonian Museum, SFMoMA in San Francisco, and MoMA in New York has 38 of his designs in their collection. Mirko taught advanced design classes at Cooper Union with Milton Glaser, and teaches Master Degree classes in Illustration at the School of Visual Arts. He also organizes and curates shows and lectures around the world. The most known of them is the Tolerance Poster Show which appeared 53 times in 24 countries around the world which appeared 53 times in 24 countries around the world.

You can see more of Mirko Ilić's work here:

Special thanks to thr Museum of Modern and Contemporary Art in Rijeka, its director Slaven Tolj and curator Sabina Salomon for lending us many of the works shown at the exhibition