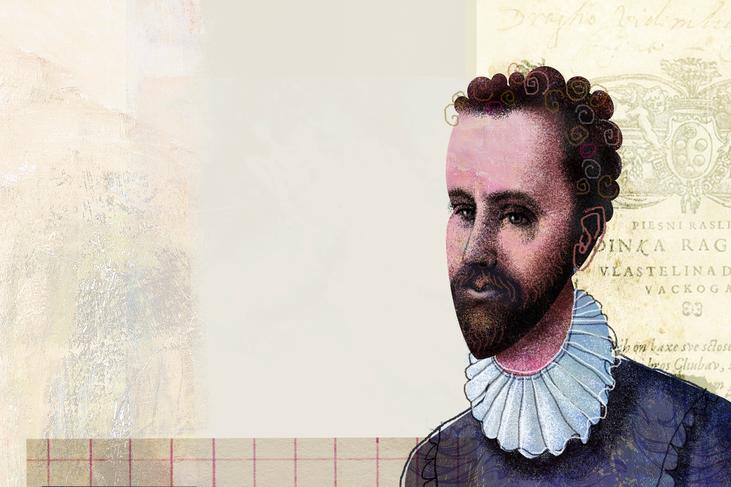 (Dubrovnik, 1536 – Dubrovnik, 1607) Born in Dubrovnik in the patrician family, Dinko Ranjina received an excellent education in his native city, he learned Italian and was introduced to Italian poetry and classical sources, as well as the local tradition of Petrarchist poetry, which was later reflected in his poems.

As a young man he was irrepressible and restless, as was his subsequent poetic expression, and his name was often mentioned in the context of numerous scandals and transgressions. When he turned 20, he joined his brother in Messina where he worked as a merchant. Hallmarks of his stay in Italy were the love affair with a Latin woman named Livia and running away from creditors; in Florence there was even a warrant for his arrest which said he was wanted dead or alive. Even with such a tumultuous life, he was still spending time in elite political circles – he visited the court of the powerful Cosimo I de’ Medici. Medici even admitted Ranjina to the Order of St. Stephen. After he returned from Italy, he performed several important duties in Dubrovnik, and was elected Rector of the Republic seven times. He died in Dubrovnik in 1607 and was buried in the Dominican monastery. He was the author of a collection of poetry entitled Pjesni razlike (Miscellaneous Poems), which surpassed the fame of the first generation of Dubrovnik Petrarchists (Šiško Menčetić and Džore Držić) who he emulated. The collection of poems was published in Florence in 1563 when the author was barely thirty-years-old. The book contains romantic, satirical, bucolic, religious and instructive poems, with lascivious unbridled verses of a restless and unrestrained poet. He was not writing only in Croatian in Italy – the same year that Pjesni razlike were published, 27 sonnets written in the Italian language were included in the anthology Rime scelte da diversi eccelenti autori. In the context of his time, and paraphrasing Tasso’s text, Ranjina wrote a tribute to poetry, that he proclaimed to be a gift from God and, as such, having a higher purpose and great social power. Loneliness, homesickness and love for the woman named Livia, defined the poetic context of this canzoniere. His poems have the power of perception, and express the poet’s vitality and sensuality, not just corporeal imagery, and they reflect the existential questions and turbulent times that he lived and created in. Ranjina’s poetry announced great Baroque themes; transience and death. All his youthful transgressions were forgotten in his mature age in Dubrovnik, and he was celebrated and respected as an excellent poet and a nobleman who was engaged in political and diplomatic service.