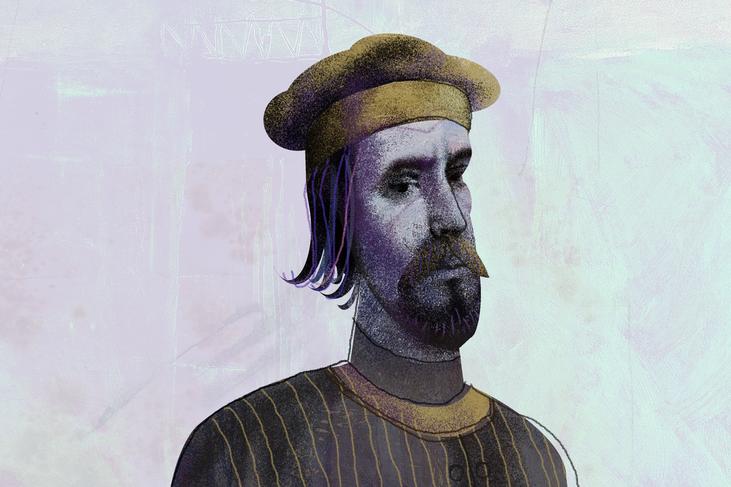 (Cava de' Tirreni near Salerno, early 15th c.? – Naples, after 1455) Onofrio di Giordano della Cava could probably not even have imagined that the inhabitants and many visitors of Dubrovnik would continue to mention his name daily almost six centuries after his death. Namely, both east and west ends of Placa (Stradun) main street in Dubrovnik, have one Renaissance “Onofrio” fountain, so his is probably the most frequently mentioned personal name in Dubrovnik, because these fountains, besides bringing water to the city and serving as its decoration, have also become visual spatial references, i.e. places where people agree to meet.

The occasion for the arrival of this obviously capable engineer to Dubrovnik was most probably an accident; in August 1435, part of the Rector’s Palace burned down together with the armoury that was located therein. Although part of the Palace remained in use and some of the offices continued to function, activities on the renovation of the most important palace in the city and the centre of power of the Dubrovnik Republic were initiated. The Senate’s decision of May 1435 authorized the Rector to talk about the necessary works “with masters who came from Apulia.” The record of Onofrio’s arrival to Dubrovnik, as well as the detailed description of works on the palace, was provided by an eye-witness to these events, the humanist and professor at the school of Dubrovnik, Filip de Diversis, who said that “Andreucio de Bulbito from Apulia, who was the business manager of citizen Jakov Kotruljević (…) brought master Onofrio di Giordano della Cava, the best builder (…).” The two of them, obviously awaiting the response regarding restoration works on the Rector’s Palace, signed a contract with the state to build an almost 12 km long aqueduct from the spring in the village of Šumet to the city, for a very high fee of 1,000 gold ducats. The aqueduct was supposed to be completed by the end of October 1437, and after its completion in 1438, the Great fountain by the Pile Gate was built. It is a circular, actually, a sixteen-sided structure (reservoir), covered with a cupola, with columns and 16 waterspouts, decorated with leafy mascheroni (masks) that several masters worked on, including Petar Martinov from Milan, who created the original cupola (destroyed in the 1667 earthquake) and humanist Ciriaco Pizzicolli from Ancona, who composed an inscription on the memorial plaque. Later on, Onofrio arranged for the construction of the Small fountain under the bell tower, as well as the creation of fine Renaissance sculptural ornaments that were created by the aforementioned Petar Martinov from Milan.

Although bringing water to the city represented a true achievement, not only of architecture and sculpture but of the Renaissance lifestyle, Onofrio’s main commitment in Dubrovnik, between 1438 and 1443, was the renovation of the Rector’s Palace. The Rector’s Palace was modified several times after Onofrio’s time (in 1463 and after the 1520 and 1667 earthquakes) so his interventions are not easily discernible on the Palace today, but recent research shows that what Onofrio envisaged and executed then, basically determined all future interventions in this important building. The Rector’s Palace became, in its time, an ideal solution in the typological, functional and representative sense, which was made possible by the fact that Onofrio di Giordano della Cava was an excellent engineer, who was obviously familiar not only with the decorative aspect of the building, but he paid special attention to its structure, construction and organization of the building site. Even after he left Dubrovnik in 1443, the work on the Rector’s Palace continued according to his plans, but a lot of his work was damaged in the gun powder explosion in 1463. Studying numerous archival documents from that period, one gets the impression that there was almost no part of this palace that Onofrio did not “touch,” but, besides the expansion of the Palace’s size, his best innovation had perhaps been the design of the atrium. In terms of the artistic style that is evident in the Palace – i.e. Early Renaissance with Gothic elements, the Palace was obviously envisaged as a symbol of confidence of the small free Republic, in the humanist atmosphere of Dubrovnik in the mid-15th century, because, as eye-witness Filip De Diversis said, “Dubrovnik Government decided to build the Palace again, even more magnificent that it was, sparing no expense (…) and engaged as its master builder Onofrio di Giordano della Cava from the region of Naples.” We should also mention that in 1439, master Onofrio worked on the fortifications in Ston, which was the second city, in size and importance, in the Dubrovnik Republic.

After Onofrio left Dubrovnik and returned to Naples in 1443, he was instructed by the kings of Naples to work on the renovation of Castel Nuovo and several other buildings. In 1455, Ragusans asked the King of Naples, Alfonso of Aragon to permit Onofrio to come to Dubrovnik again and work on the city fortifications, but were unsuccessful. Such an excellent engineer was too valuable to the kings of Naples so the Ragusans could not make this happen. So, the man, under whose supervision successfully “started the construction of the amazing and magnificent and beautiful palace on top of the square and by the sea, with columns and porticos on all sides, worthy of any ruler and rector of the city of Dubrovnik,” never came back to Dubrovnik and his future fate in Naples, at least for now, is not known.