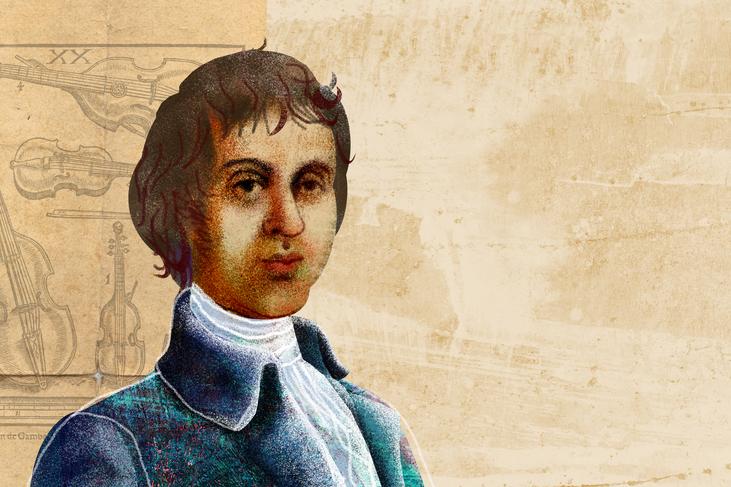 There were 26 different versions of the Jarnović surname in the 18th century. We cannot determine, with absolute certainty, what was the original surname of Ivan Mane’s ancestors in the region of Dubrovnik. The English opera singer, Michael Kelly recalled performances in Vienna of “two of the greatest violin virtuosos in the world, the first being Giornovich.” “We cannot find sufficient words of praise for Mr Jarnovits, one of the most perfect, agile and brilliant fiddlers we ever heard…” “The Zarnovity virtuoso, in the service of the Prussian prince, performed his own solos and concerts. They tell us that the audience was unanimous in their admiration, he outplayed all foreign virtuosos that ever performed here…” – were just some of the comments. Very little is known about Ivan Mane Jarnović’s life; he was reputedly born somewhere in the territory of the former Dubrovnik Republic, perhaps even aboard a ship in the waters around Dubrovnik. One of his friends wrote this down and claimed that his contemporaries called him a Ragusan. We still have no clear idea what his upbringing and education was like, but he certainly received an excellent music education, probably in Dubrovnik. The first reliable information about his life dates back to 1767, when he was living in Paris as a twenty-seven-year-old professor of violin. This was only one of his musical activities; his strong personality as a musician was described by his contemporaries and the daily newspapers of the time, and most of the reports talk about his performances around Europe. This is how we are able to follow Ivan Mane’s tumultuous life – from Paris, Berlin, Warsaw, Vienna, London, Hamburg to St. Petersburg, where he died suddenly at age 64. The public activity of this virtuoso violinist, who performed in greatest European cultural centres, demonstrates the cosmopolitanism that was shared by the greatest composers and performers of the time: Mozart, Haydn, Gluck, Dittersdorf, Viotti and others, whom Jarnović often had contacts and performed with in front of large, mostly high nobility audiences. He was widely known in European musical circles for his performance abilities, and is remembered in the history of music as the first composer who introduced romance into the structure of the violin concerto – the sentimental lyrical movement with a simple and appealing melody which would later be adopted by Mozart, Beethoven and other important composers. Since we cannot precisely determine where home was for this passionate artist and world traveller, it does not surprise that he titled the only opera he ever wrote Abroad and at Home.

Because of his volatile nature, Jarnović often incited conflicts that would result in physical altercations, duels, even a prison sentence. It seems that was the reason why he moved so much. His “notorious” temperament was fictionalized by his contemporaries in literary works; in 1844 the novel Jarnowick, written by Gustave Desnoiresterres was published in Paris, and that same year Édouard Monnais published a novella entitled Une leçon de Jarnovich.