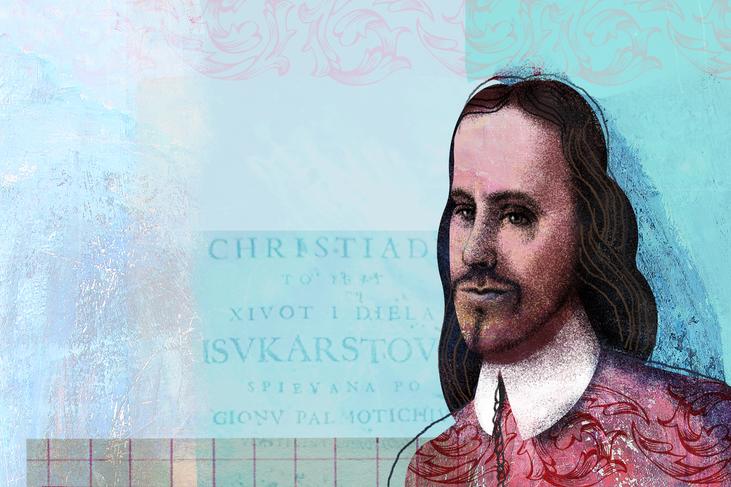 As was customary for members of his class, Junije performed various duties in the service of the Dubrovnik Republic. He was a rector in Mljet, Konavle and Lastovo, and in 1656 he was elected to the Senate. Only one Latin panegyric, dedicated to the Jesuit Giovanni Bargiocco, was published during his life. In 1670, thanks to his brother Džore and Stjepan Gradić, the epic poem Christiade (Kristiade to jest život i djela Isukrstova) was published posthumously in Rome, according to the author’s wishes. It is a translation of the eponymous Latin poem by M. G. Vida, that was dedicated to the Swedish Queen Christina. Palmotić was the most prolific playwright of the old Croatian literature. His dramatic works, primarily tragicomedies, were successfully shown in open theatres in Dubrovnik. They were performed by amateur troupes Orlovi, Smeteni and Isprazni, while the author himself assisted in their staging, suggesting some of the typical Baroque scenic solutions. The information about plays that were performed in front of the Rector’s Palace can be found in manuscripts and provide valuable testimony about the rich theatre activity in Dubrovnik in the Baroque period. He wrote his dramas in verse, mostly octosyllabic, which predominated in older Croatian poetry. In Pavlimir, one of his pseudo-historical tragicomedies with a Pan-Slavic theme, Junije depicted the founding of Dubrovnik; the central figure is the City’s founder Pavlimir, and it glorifies the illustrious history, establishment of the city and its independence, and points to the danger of the loss of freedom, that was at the core of Dubrovnik’s prosperity for centuries. His was inspired by Orbini’s Kingdom of Slavs and Ljetopis popa Dukljanina (Chronicle of the Priest of Duklja). In this group of works we also include Danica, Captislava and Bisernica. The works Armida and Alčina were inspired by Ariosto and Tasso. Palmotić also wrote poetry as a young man, influenced by oral-literary forms and expressions, but this segment of his oeuvre was not preserved. However, extant are some panegyrics, religious verses, a poem on the patron saints of Lastovo, Ss. Cosmas and Damian, and St. Catherine of Siena. Also extant is the polemic burlesque poem Gomnaida (Govnaida), in which he attacked one of his contemporaries, a Dubrovnik patrician and politician in a furious, satirical, and one might even say, vulgar manner, obviously because of serious insult. Palmotić’s authorship of these satirical verses was long suspected because of an abundance of vulgarities and obscenities, however research confirmed that he was the author of the poem, and it also confirmed the year they were written – 1646. This work marked a transformation in Junije’s oeuvre, and here are some of its verses: “Govnene su riječi tvoje, govnena su tvoja djela, u nosu ti govna stoje, govna su te odsvud splela, u ustijeh djestro hrani. Vȁs si govnen, kneže usrani!”