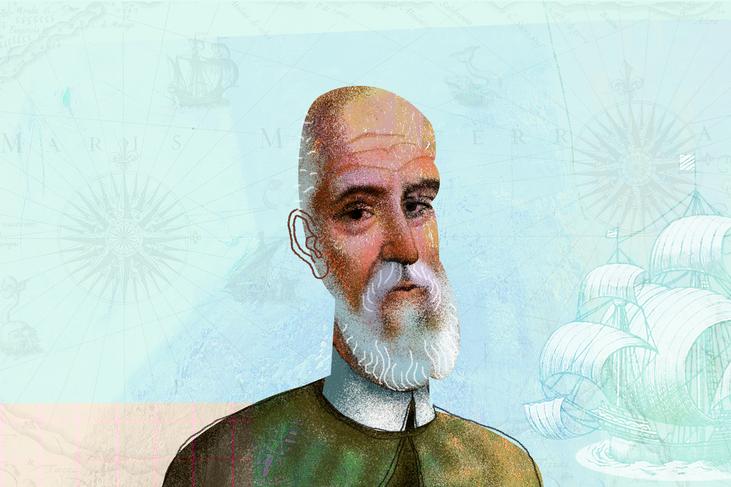 (Island of Lopud, c. 1522 – Dubrovnik, 20 July 1607) Miho Pracat was born around 1522 on the island of Lopud in the Elaphiti archipelago. In the 16th century, Lopud naval captains owned one quarter of the powerful Dubrovnik merchant fleet (the third largest European maritime power, after Venice and Genoa). From early childhood he sailed aboard the Sv. Katarina ship, and in 1543 he replaced his uncle in the position of the ship’s commander.

With his own large galleys, called Gospa od Šunja and Sv. Ivan Krstitelj, he sailed and traded in goods in the western Mediterranean. He was attacked by corsairs twice and experienced two shipwrecks at sea – he was captured and then released after ransom was paid, which eventually made him leave the captainship and permanently move to Dubrovnik. As an accomplished merchant who traded in fabric, wheat, oil, wool, leather and colonial goods, he accumulated great wealth. With hard-work he became the central figure in Dubrovnik’s financial affairs and a prominent individual in European affairs. The clever islander became a rich man, almost a millionaire in today’s terms. He bequeathed part of his wealth for humanitarian purposes, especially the retrieval of slaves, his captured compatriots, and he also left a generous donation to his homeland. He married twice and had no children, and his second wife Vica was an excellent business partner. He died in Dubrovnik when he was around 85 years old.

His storied life proves that life at sea is not as monotonous as it sounds. According to legend, Miho went to sea twice and both times he had an accident and lost everything. Annoyed, he noticed a green lizard trying to climb a wall two times, and falling down both times, but on the third try it successfully climbed the top of the wall! Encouraged by this example, Miho decided to try his luck the third time – he sailed away again and became a rich man. In the middle of the 16th century, the Mediterranean was a volatile battleground between Turkey, France and Spain and, as a result, hunger ensued. Miho, who was eager to make money, sailed with his ships full of wheat to Spain and saved the country from starvation. As a sign of gratitude, Emperor Charles granted him an audience just as he was about to shave his beard. The Emperor offered him gold, power and titles. Miho rejected it all, because he was a wealthy man, owner of his ships and a proud citizen of the glorious city of Dubrovnik! So, he asked the Emperor to give him a white napkin underneath his beard. The Emperor obliged, and it is said that the napkin is still kept in the parish office in Lopud today, as a symbol of success of this powerful and capable mariner.

In its wisdom, and being grateful to Pracat, the Dubrovnik Republic deliberated for a long time how best to reward this great, noble and renowned citizen, and several decades later they decided to erect a monument at the very centre of its power; in the atrium of the Rector’s Palace. Italian sculptor Pier Paolo Jacometti from Recanati created the bronze bust of Miho Pracat in 1638. This was the only monument ever erected to honour a citizen of Dubrovnik during the time of the Republic, as it was well-known that the Republic disliked any ostentatious displays. We should conclude this biography with a verse by Luko Paljetak: “Bio je jedan čovjek i zvo se Miho Pracat, I u njega je bilo solada sve za bacat, Dubrovnik cijeli š njima mogo je potaracat. Spomenik su mu digli u Dvoru, znajte i vi: MICHAELI PRAZATTO, BENEMERITO CIVI!”