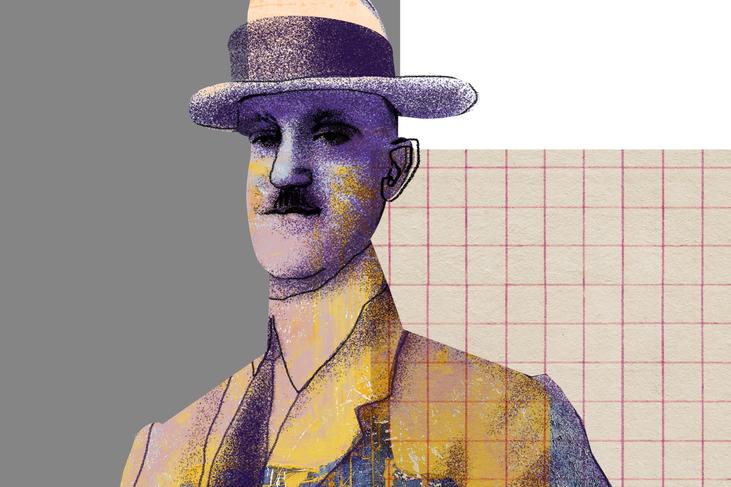 (Dubrovnik, 9 October 1857 – Belgrade, 30 August 1929) Ivo Vojnović was born in a prominent family in Dubrovnik. He was educated in Dubrovnik and Split and eventually Zagreb, where he studied law. He was devoted to theatre and was a playwright at the Croatian National Theatre in Zagreb until 1911, after which he decided to live as a professional writer and travelled to Italy, Prague, Budapest and Belgrade looking for work.

In July 1914, the Austro-Hungarian government accused him of high treason and he was arrested and imprisoned in Šibenik until 1915, from where he was transferred to the Sisters of Charity Hospital in Zagreb because of illness. He died in Belgrade in 1929, almost completely blind, and was buried in his family tomb in Dubrovnik while the entire city was “draped in solid black,” and the sorrowful procession towards St. Michael was attended by “emissaries of the king and government, and a multitude of citizens with representatives of military and civilian authority.” He was the most important author (lyricist, storyteller and playwright) of the Croatian modern period and the last of the three great Dubrovnik writers, alongside Marin Držić and Ivan Gundulić. He is best known for his work A Trilogy of Dubrovnik, that encompasses an entire century and that narrates the demise of the Dubrovnik Republic which left him, as a member of its nobility, inconsolable by the loss of freedom and vanishing of an entire world. This “twilight” of the former glory is depicted by the, still famous, Ivo in three one-act plays – three bunches of laurels, wormwood and heather, as he called them in the dedication to his father – from the time the French entered the City (Allons enfants!), through the intimate second part set in Mara Beneša’s house and the private drama of her youngest daughter Pavla (Twilight), to the third part (On the terrace) which takes place in the afternoon and evening hours of a single day in 1900, when “those who have forgotten everything” arrived. He is considered the founder of modern Croatian drama. His first literary appearance was in 1880, when August Šenoa, then editor of the magazine Vienac, published his short story Geranium, that he signed with a pseudonym Sergej P. The deep and complicated relationship Vojnović had with the city of his birth, a source of his inspiration, produced most valuable works in his oeuvre. Vojnović’s dramas are divided into three thematic circles: dramas about life in Dubrovnik (Equinox, A Trilogy of Dubrovnik, Masquerades in the Attic), cosmopolitan dramas (Psyche, Lady with a Sunflower) and dramas created based on folk tale, with a political-tendentious note (Death of the Mother Jugovići, Resurrection of Lazarus, A Prologue to an Unwritten Play). There is also the collection of poetry Lapadski soneti (Lapad Sonnets) that poetically framed his central work – A Trilogy. During one of his visits to the City, the great Tin Ujević wrote: “Dubrovnik, the city of poets, born with Marin Držić, achieved fame with Ivan Gundulić, and died with Ivo Vojnović.” His artistic activity lasted for over half century, in the course of which he corresponded with many people in the literary-cultural circle and members of his family. More than 2,000, or to be more exact 2,356 of his letters were discovered, which is a unique example in the corpus of Croatian literature. The letters were found in private property, archives, foundations and theatre records in Dubrovnik and Zagreb, Belgrade, Novi Sad, Zadar, Šibenik, Split, Križevci, Bjelovar, Prague and Nice. In terms of family, most letters were sent to his mother that he was especially close to – she was the centre of his world, and to his brother Lujo. These letters reveal Vojnović’s intimate world, his humanity and warmth. However, they also expose certain animosities between renowned persons: “I hear that abominable Krleža wrote some disgusting garbage against me again. He is annoyed that I am alive!” wrote Ivo in a letter to Lujo Vojnović, sent from Dubrovnik on 7 July 1925.